This is one of my older ebooks from EC-actually one of my fave stories from them, really.  I’ve always loved this one for some reason.  It was originally only available in the Hot Spell/Seasons of Magic anthologies, but now it can be purchased on it’s own. 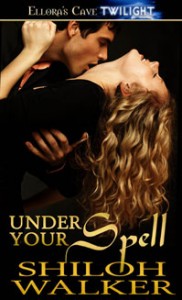 Nicholas Montgomery fell in love with a bewitching woman only months before his sworn obligation to marry another. His beloved’s fury cast a spell that lasted hundreds of years.

You will never love another like you love me. You will never know a moment’s peace for what you have done. Until you love me enough to forsake everything—your honor, your pride, your own soul—we cannot be together.

Reborn into the body of Sean Concannon, a powerful witch, he has finally found his beloved. Now he has a choice to make, and a sacrifice. One he may be unprepared to make.

He took the turn onto the tiny country road at breakneck speed and slowed only when it was that or take out the stupid cow that had wandered into the road. A cow, he thought with a laugh. How…quaint. Almost like home.

He had her address and used a map he had bought to lead him to her house. His blood pounded hotly through his veins. This is it. Sean knew, with a bone-deep certainty, that he and Aislinn would find each other this time. This would be their time. And maybe the searching was already over. Maybe the brooch had found its way to Rhiannon Welles because Rhiannon was Aislinn.

God, to be inside her again, after all these centuries. To hear her laughter, and feel that happiness he had felt only with her.

To once more share the joy of making rainbows and spinning magic out of the air.

And then Sean stood outside, staring at the quaint little house and the hope that had been blooming inside him withered and died. It wasn’t her. If Aislinn had been inside Rhiannon’s body, her magic would be permeating this house and he would sense it.

He scrubbed his hands over his face and muttered, “Fuck me, I’ve gone bloody insane.”

All because her husky voice, for one brief second, had sounded familiar.

Grimly, he turned to get back into the car. He’d wait for her at the shop. Get the brooch, even if it involved stealing it from her. He’d replace it with a replica and she’d never notice, mortal that she was, and he would get back to searching for Aislinn.

And then the door opened.

And stopped dead in his tracks.

Rhiannon left the house, tired and achy. She hadn’t slept. Those damned dreams. Dreams of a medieval knight with dark hair and wild green eyes, and strong, gentle hands that held her close. Magic that she used to make, rainbows and laughter that filled her soul.

Scorching her skin, her hair, her lungs, burning her, eating her flesh. Smoke burning her lungs, choking her, until it killed her, and she still kept burning, until the fire turned her flesh to blackened ash.

She had woken with the screams still ringing in the room.

She had always had a deep, abiding fear of fire. Her adoptive parents had done everything they could think of to soothe her past it, but to no avail. Every therapist, every counselor, no luck. One shrink, upon learning she was adopted had suggested she had been burned, or perhaps witnessed a bad fire before they adopted her. But they had taken her at birth.

No fireplaces. No fireworks. She couldn’t even stand cookouts, or cigarette lighters.

She was halfway to her car when she saw the man standing there, staring at her with eyes that saw through to her soul, burning silver, scorching eyes that stared at her, eating her as though starved for the mere sight of her.

And she froze as some bone deep recognition tore through her.

Sean moved across the distance that separated them and caught her shoulders, staring down into her face, so much the same, even the blonde hair that fell around her shoulders in soft waves. Her eyes were wide and purple, not blue, but purple, her mouth wider, lusher, her figure trimmer, and she was a bit taller.

But it was her.

“Bloody hell,” he whispered, staring down into her face as shock raged through him. Cupping her face, he covered her mouth with his and ravaged her.

Rhee went still. That odd moment of recognition was gone. She knew him, of course. Most people did know his face. Who didn’t know Sean Concannon? He was easily as well known as David Copperfield. Tall and lean, with wide shoulders, slim hips, handsome, winsome, with a sexy Irish accent and illusions that stunned and awed.

He was at her house and wanting her property.

But that didn’t explain why he was staring at her as though he knew her.

Or why something inside her seemed to know him, know how he would taste, how his body would feel against hers, how it would feel to have his naked chest crushing her into a bed a of grass…grass?

Buy (May not be active yet)

One Reply to “New Releases/Reissue…Under Your Spell”