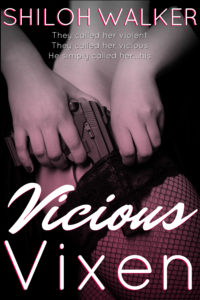 He’s given one chance at redemption—hers and his.

Hired killer, Vixen Markham doesn’t have any illusions about life or love. Unable to trust even the one man she lets into her heart, she makes a decision that she’ll regret for the rest of her life—which won’t be much longer by the looks of things. Loaded with vengeance and a small arsenal of weapons, she’s ready to face up to her past and say goodbye to her future, until she’s confronted by a pair of eyes she could never forget.

Graeme Mackenzie Lawson lived a hard life. Hard on himself and harder on those who got in his way. Betrayed and murdered, he’s given one chance at redemption—but not for himself—for the woman he loved, the woman who killed him.

Can he keep Vixen safe, when she seems determined to lose her life—and her soul?

If there was a better way to wake up, Graeme wasn’t so sure he wanted to know. Her mouth was already cruising down over his chest as he pushed through the foggy place between slumber and waking. When he opened his eyes, she already had her hand wrapped around his cock, holding him steady as she took him in her mouth.

It was slow and sleepy, sweet and easy. One of the miracles of this woman he loved. Sometimes it was like this, like some sweet dream that couldn’t possibly be real. Then other times it was heat and fire and raw power, something that had to be real, because the intensity of it could never exist within dreams.

Sweat bloomed on their bodies as she moved up and straddled his hips, taking him deep inside. She was hot, hot as fire, wet and silky soft around him, her pussy wrapping around his aching flesh in a slick, snug grasp. Her pale hair fell around her shoulders, down her back. Graeme reached up and fisted his hands in the long strands, pulling her down and covering her smiling mouth with his.

“I love you,” he muttered. But he ached inside. She’d never say it back. She never did.

But she sighed against his mouth and whispered, “I love you…”

Had he been dreaming? He didn’t really know if he slept in this place, but whatever that was, it had been a dream. So he had to have been asleep. At least he assumed he was sleeping. Nothing really made sense here.

A dead man dreaming made about as much sense as Vixen admitting she loved him.

Graeme’s bitter laugh echoed in his head but it made no sound. In this weird place between life and death, all too often there were no sounds. When he could hear much of

anything, it was muffled. It was kind of like that twilight sleep, all fogged and hazy, but instead of everything taking on that surreal quality, sound and scent were more defined. Everything—sight, sound, memory, thought—was more pronounced, yet in an odd sort of fashion—hazed.

Only his thoughts and memories seemed real.

There was something of a pattern to life here. Periods of activity that mostly mimicked day, when light was pronounced and all the travelers in the way station left their “homes” and milled around with each other. There were no jobs here, no place to go, nothing to do. There really wasn’t much interaction between the travelers, beyond seeing each other. Graeme hadn’t thought death could be this boring. When he left his home—if it could be called such—all he did was wander around and think about things he’d rather not remember. Like Vixen…

It was frustrating as hell, but he couldn’t not do it. Any kind of interaction happened outside his place. Within it, he hardly seemed to exist. Within his home, it was too hard to think, too hard to focus and thankfully, too hard to remember.

Yet another reason why that dream was so out of place.

He had thought of her. Too often, in fact, and sometimes he would retreat to his home because there, he lost enough of himself that he didn’t have to think of her. Considering that being in his home was a respite from memories of her, Graeme couldn’t figure out why in the hell he went out there with the others so often.

Unless he was just into self-torture.

Or maybe it’s because you miss her… Missed her. Why in the hell would he miss her?

If it wasn’t for Vixen, he wouldn’t be here.

Hell, everybody had been right about her. Graeme was the one who’d been wrong. When the time came, she’d stuck a knife inside him like he was just another street thug she was getting off the street.

He hadn’t even mattered.

Quit thinking about her.

But it was too late. The tidal wave of memories had started and Graeme was just going to have to ride it out.

They called her vicious.

They called her vindictive.

They called her violent, volatile…

But Graeme Lawson, arrogant bastard he was, he had simply called her his.