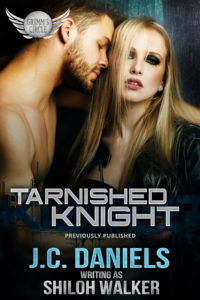 Born with a natural talent for killing unnatural things, Jack has always known things he shouldn’t. The fact that Perci is one of them glows all over her. Giving him an unholy urge to see just how far he can push her before don’t touch memelts into touch me there.

So much for trying to help her get over the pain she felt, Jack thought.

That woman wasn’t fragile. She might look a bit more…well, human, than normal, but she wasn’t fragile. Still, the pain he’d glimpsed in her eyes tore at him. He wanted to soothe…stroke, take it away.

Shit, what had he expected, that she’d believed him? And why in the hell was he so angry? Jack didn’t know, but he was beyond furious. Beyond pissed and he unloaded on the heavy bag with unrestrained rage. He’d been pounding away for damn near an hour and his arms felt like lead, but he couldn’t stop.

Yeah, probably seemed easier to think he was lying than to consider he might be telling the truth, he supposed.

Abruptly, he realized he wasn’t alone.

Without looking at her, he said, “Do us both a favor and just get the hell out of my house, princess.”

“One of these days, you’ll get the point when I tell you not to call me that,” she said, sighing. But the heat was missing from her voice. “And I’m not leaving. In case you haven’t figured it out, I’m here for a reason.”

“Yeah? You mean other than pissing me off?” He landed one last punch on the bag and then turned to stare at her. Sweat dripped into his eyes, stinging them. He stalked over to the edge of the workout area he had installed in his garage, grabbed the towel and wiped his face off.

Perci remained quiet. He shot her a glance and immediately wished he hadn’t. The look in those dark brown eyes was enough to lay him low.

He choked back a groan and looked away, throwing the towel down. Bracing his hands on the unpainted concrete wall, he bowed his head and closed his eyes. Don’t look at her. She can’t read emotion—just pain, and seriously, having your dick tied into a knot isn’t real pain. Is it?

He heard the heavy bag’s chain rustle and he looked back, saw her standing next to it, watched as she stroked one hand down the worn leather.

He wanted to see that hand stroking something else.

She needed to get the hell out of here.

“You and me both know you would knock that thing clear off the chain in one punch,” he said. He smirked at her. “And although I really don’t need to coddle my ego, I’d just as soon not watch a woman bust the bag. So let’s just not.”

Perci smiled at him. Then, quicker than he could even track, she moved. That long, slender body moved up in the air, she kicked—jumping back kick, he thought, but damn she was fast. The bag went flying…and stayed on the chain. She caught it on the first backswing and smiled at him. “I know how to pull it. We learn that early on. Control. It’s important.”

“Considering you could probably break me in half? Yeah. Important.” He tried another tactic. “I need a shower. So if you’re not going to get the hell out, can we chat when I’m done, princess?”

Her lashes flickered over dark eyes and he sauntered over to her, reached up. He trailed one finger along her jaw line, watched as her eyes closed, as a breath shuddered out of her. “Unless you want to join me. Want to wash my back, princess?”

Her lashes lifted and she stared at him, her gaze hot, heavy…and so fucking hungry.

His mind started to screech a warning as she closed the scant distance between them. “Sure, slick. I’ll wash your back…after.” Then she reached up, curled a hand around the back of his neck and pulled his head down to hers.

As their mouths met, Jack realized this hadn’t quite been the outcome he’d been pushing for.