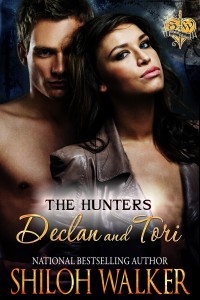 Declan Reilly was normally the last person she’d go to for help, but now he was the first on her list. He can help; she knows he can. She never could have planned on what happens next, though…the sexy detective is so much more than he appears.

Tori McAdams was a sensible woman. She didn’t believe in hocus-pocus, she didn’t believe that crossing a black cat’s path was bad luck. She had broken more mirrors than she cared to count and couldn’t remember ever wishing on a star.

And she didn’t believe in vampires.

But the petite little blonde in front of her obviously did. Her eyes were wide and frightened, and from time to time, got that oddly unfocused look of true fear. As a private investigator, Tori had learned to smell bullshit a mile away. And this girl truly believed somebody was stalking her, trying to turn her into a vampire.

Some sick fuck had done a real number on her. No telling what the back-story was, because the girl was getting more incoherent by the second. Jeez, what was she—all of nineteen?

And it wasn’t getting any better as she sat up and took a closer look at the mark on the girl’s neck—revealed as her head fell forward—her pixie-like hair falling away from the ragged gash.

Gash? Or teeth marks? Shit, now she was losing her mind.

Tori knew she couldn’t turn this poor kid out onto the streets—and young Dani Mitchell was too scared to go home. “He can get me there,” she whispered, over and over again, when Tori had offered to take her.

So, reluctantly, knowing she had no other choice, she made up the little sofa bed in the small room beyond her office. God knew she had spent enough nights here after a late night stake out.

And she doubted the little thing in front of her was a danger. Dani looked about as dangerous as a wet kitten. It took a lot of soothing and hand holding before the girl would stretch out on the bed, but finally she fell asleep.

Tori collapsed into her chair with a sigh and rubbed her eyes with her fingertips. She yearned for a tall, cold margarita, her bed, and some aspirin.

Instead she sat up, reached for the phone, and started making calls.

The last one on her list should have been her first.

But Declan Reilly was somebody she tried to avoid whenever possible.

He made her itchy.

In the worst possible way. Hearing his voice was enough to harden her nipples, dampen her panties and have her verging on the edge of orgasm. He was sex incarnate—sexy as a god, smart as a whip, and just the tiniest bit arrogant. He had wide shoulders, rounded with muscle, a powerful chest that tapered down to a flat, carved belly and narrow hips, strong legs that he covered with denim which encased them so well, showing him to perfection—especially that ass…Tori shook her head, forcing herself to concentrate.

But when Declan was in her thoughts, it was difficult.

A sexy Irish accent remained from the years he had spent growing up in Dublin, and looking into his misty green eyes was almost enough to make Tori believe in leprechauns and faeries.

Almost, but not quite.

He had gone out of his way to make it clear that he found her very appealing. He flirted, he teased, he asked, he seduced. It didn’t take much though; Declan was a seduction—with thick, wavy, blond hair that grew a little too long over his collar, seductive green eyes, a clever mouth, hands with wide palms, and long narrow fingers.

But Tori refused to give in.

She was tempted. Thinking of his hands, his mouth, the way he smelled, damnation, was she tempted.

But there was a flaw.

Only one that she could think of, but it was a doozy.

No way, no how was she getting involved with a cop. No matter how mouth watering he was.

He wasn’t home. Tori blew out a breath as his lyrical voice floated over the line from his answering machine. She left a simple message, “Call me.”

He was one of the few cops she could count on to get a fair shake. If her man had any similar crimes out there, she would know. She’d also find out if Miss Dani Mitchell was a fake.

And she’d get teased and tormented until she had to relieve her frustrations with her showerhead before she went to bed.

She called the office, hoping maybe he had been called in or delayed. But his cheerful partner, Cy Grady, informed her that Declan was out of town for a few days. She politely refused his offer of help and whirled in her chair to study the sleeping girl lying just beyond the doorway.

With a sigh, she rose and slid her holster back on.

Might as well see if he was haunting the strip joint where Dani worked.

Agreeing to help Dani Mitchell was a choice that Tori was certain she’d live to regret. Oh, the girl was the real deal. Her manager, well, ex-manager, had fired her a few nights earlier when she wigged out in the middle of a lap dance, screaming that the patron had bitten her, his eyes glowed, and he was a monster.

And since said patron had paid very well for that lap dance, the manager, being the gentlemen he was, had been pissed that Dani had gone stark raving mad in front of other customers.

And now, story confirmed, Tori was cornered in an alley by a man who moved faster than greased lightning.

“Where is my little dancer, won’t you tell me?” he purred, crossing the alley like some giant slinking cat, his pale blue eyes seeming to pin her in place.

A cat? she wondered fuzzily.

Not a cat. A snake, a cobra—the kind that could freeze their prey with dread and devour them on the spot, fear holding them prisoner.

And Tori was afraid.

Deeply, mortally afraid. Some thick fog seemed to cloud her brain, the way it did when you were put under at the dentist’s office. But laughing gas never made you feel so frightened or so scared.

Tori didn’t get scared easily, but she was now—for no obvious reason.

She reached up, pressed her fingers to her temples, shaking her head. The slight fog faded, and with it, the fear. All that remained was the slightly edgy feeling caused by nerves.

“I’m not sure what you mean,” she lied easily, shifting her body so that she could draw her gun without it being quite so obvious.

“My little dancer,” he repeated. “I know you’ve seen her. I can smell her on you. I want her back.” He spoke slowly, politely, with just the wisp of an accent in his voice…Spanish?

Smell her? “Can’t help you,” she said flatly. And even though the description she had gotten out of Dani had been basically worthless, she knew she was talking to the man who had been scaring her. “I really don’t know any dancers.”

“Not lying.” She didn’t really know Dani. Just because she was trying to help her out didn’t mean she knew her.

He moved—from fifteen feet away to less than five—so quickly, in a blink. Her head was going foggy again. Fortunately, her reflexes weren’t. She stepped back—one step, two—while lifting her gun and pointing it straight at the man’s nose.

“Don’t come any closer,” she warned.

“Do you really think that silly gun can hurt me? Didn’t she warn you? Tell you what I am?”

“A bullet that will rip your head from your shoulders will hurt you, I promise.”

“Rip my head from my shoulders?” he repeated, sounding amused.

His voice sounded like honey now, sweet, addictive. He moved another gliding step closer, and she wanted it. Wanted him to touch her, to taste her. Wanted to hear his voice.

The honey was poisoned. She heard it and she narrowed her eyes. Concentrated. Focused.

The man’s eyes narrowed and he cocked his head, studying her—puzzled.

“No.” He said it just as softly, an evil smile curling his mouth. “I think I’ve changed my mind. I don’t want that silly little dancer now. I want you.”

A sick ball of fear curled in her belly but she only arched an eyebrow. “Sorry. Charming as the offer is, I’ll have to pass.” Her arm was starting to shake. She couldn’t keep that gun aimed at his angelic looking face much longer.

“It’ll be fun,” he promised, as if she hadn’t spoken. “You will be a fun toy, not just an appetizing snack. I bet you’re a good fuck, as well. I bet you’ve got a tight, wet little pussy. I’m going to enjoy finding out.”

Color heated her cheeks and she fell back another step.

He laughed and lunged.

The bullet tore through his nasal bones, through his brain and out the back of his skull. He fell backward.

And lay on the ground, still breathing, still bleeding. Still living—and cursing her.

She holed up in her office.

She had food, bullets, a shower in the back and spare clothes. She had a crazy dancer in her bed.

She could handle this.

He hadn’t actually started trying to come after her. He hadn’t really been rolling to his knees, his ruined voice swearing, damning and cursing her.

He had been dead. It was just her imagination going into overtime. He had just been so eerie.

He had scared her. Deep, gut wrenching, pee-in-your-pants scared her. Tori paced the small confines of her office, trying to figure out what she was going to do.

Either he was what Dani had said or Tori had killed a man.

She whirled and grabbed the phone.

She needed to call Declan.

Of course, why she was so certain, she didn’t know. But he could help. He would help.

She had his pager number, and she was almost positive he always kept it with him, even while on personal time. Dialing the number, she listened to the soothing melody of his voice, and left a message of her own.

“This is Tori. As soon as you get this, call me. Declan, I need you.” She marked it urgent, sent it, and slammed down the phone.

Curling in her chair, she settled down to wait, her eyes on the door.