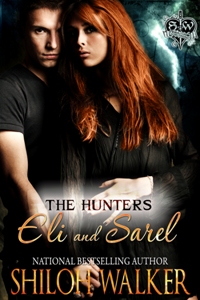 Three centuries is a long time to spend alone…but Elijah Crawford is used to it.  He’s got his friends, he’s got thugs to kill, and a mild obsession with an on-and-off again lover to keep him occupied.

But then a woman appears in his dark world, one who just might bring some light to those endless nights. Just one look makes him hunger.  Just one glimpse makes him burn.

There’s just one complication.  She wants him dead.

Warning: This book contains a pissed-off witch, a sexy Master vampire, some serious ménage action and lots of one-on-one time…of the up-close-and-personal variety.  And I do mean lots…

Eli’s eyes closed. God, he hurt. The blood in his veins pumped sluggishly and it seemed to be filled with acid, burning him from the inside out. “Tori…?” He could smell her, that subtle scent of peaches, sex, woman, and vampire.

“She’s down the hall. We can’t get her to feed, Eli,” Kelsey said, her eyes closing. She had to. She had never been much of a liar, and if he looked dead at her, he’d see the lie. Right now, he was probably too weak to scent it, but he might still see it. “Declan’s tried and she won’t respond to him. I don’t know how to reach her.”

Desperate energy suddenly flooded him as the rage broke open inside. He rolled, pinning the woman beside him, staring down in her slanted green and gold eyes. He was so fucking tired, and it wasn’t such a chore to let it all be over, after three centuries of walking alone. He would never have Tori and there was no other woman.

“You owe me blood, darling,” he purred with menace, his muscles trembling with the effort it took to move and hold her, even though she didn’t resist him at all.

Those rather amazing eyes closed and she turned her head. Baring her neck. And then she said quietly, “I know.”

Sarel couldn’t believe she was doing this.

He was as weak as a fucking kitten. His entire body was quaking with the effort it took just to move.

She could have thrown him off easily. Whatever bonds had prevented her from moving had been lifted and she could have tried to flee. No magic, that was still being held deep inside her, and would most likely reflect back on Sarel anything she tried to do.

But she didn’t try to run.

She didn’t even move away when the vampire covered her body with his.

His heart beat against hers, but weakly. He was dying. She felt sick. Her magic had done this. Her magic and her hate. “You owe me blood, darling,” he said roughly, his golden eyes gleaming like a cat’s.

Turning her head, she bared her neck and said, “I know.” She braced herself for the pain, remembering how he had mauled her father. Granted her father had been a murderer and a child molester, but Sarel had just tried to murder him, and he didn’t know that she didn’t know and…and…and…she tried to slow the panicked flow of her thought as his golden head lowered to her throat. It was going to hurt and hurt bad. And the bad thing was, she deserved it. If she had just looked, she would have seen the truth, right there in front of her, close enough to bite her on the ass.

A strangled gasp left her throat when his teeth pierced her skin, quickly, sharply, a sudden burning pain that was there and then gone, replaced by heat. Her mind still ran in confused circles—how much would he take? Would she live through it? Would he let her leave? Would he turn her into a vampire?

Then she felt a soft brush on her mind.

A gentle shush that calmed the chaos in her brain and turned her body into mush, a seductive warmth chasing away the fear that held her body stiff and cold. The brush turned into a caress that drew her body tight once more, now with need and she cried out, arching up, needs she had never known racing through her body as he fed from her, his cool body growing warm, his trembling, weak muscles stilling as strength flooded back into him.

Eli groaned when she moved against him, crying out. Still weak, he knew he wasn’t up for aught but feeding. However, his cock didn’t seem to understand that, as the blood he took instantly raced down to his shaft and he couldn’t keep from rocking his hardening cock against the notch between her thighs as he fed.

His hazy thoughts were slowly clearly and his strength was returning. Her thoughts confused him, distracted him and absently, he reached out and calmed them while he fed. She was sweet—hot, rich with youth and magic and power. The power that had damned near killed him was restoring him almost as quickly as he could swallow. He understood enough of her chaotic thoughts to recognize the grief, and the sorrow, the guilt.

The hot young body was another thing he understood, driving his cock harder against her as he fed, swallowing more, her hot blood splashing in his belly, sending fiery strength out through his body. He pumped his hips against her covered mound once more as he pulled away from her neck, pausing to lick the neat little puncture wounds, savoring the final few drops of blood before he pushed away, licking his lips and staring down at his almost murderer.

She was young. She was pretty. She was a witch. And she looked…oddly familiar.

Her lids fluttered. One hand lifted and she reached out for him, a weak moan falling from her lips. Beneath the sturdy cotton of the black shirt she wore, her nipples were hard and stiff. Eli could smell her arousal and he was tempted. If he was certain he had the strength, he just might of ripped her clothes off and given her a good hard fuck before throwing her naked ass out.

But he’d rather know why she had tried to kill him.