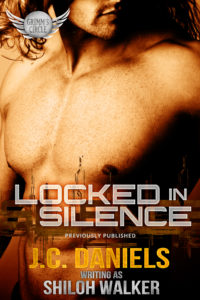 The second the words left her mouth, she’d known it was a problem.

Silence hadn’t responded—it was as though he hadn’t heard her.

But she knew he had.

It was there between them the next morning.

Vanya figured there might have been a better way to broach the subject, but she was tired of it lingering there between them. She wanted it dealt with.

Silence, though, he didn’t seem to want to deal with anything. He looked up from the axe he was polishing, let their gazes meet for just a minute. Then he focused on the blade again.

“There is nothing that happened between us last night that you need to worry about.”

“I’m not wigging out,” he replied. “And you are not falling in love with me. You’re young and—”

Vanya narrowed her eyes. “Don’t,” she said quietly, shoving back from the table.

He shifted his gaze back to her. “Don’t what?”

Irritated and humiliated, she stood and turned away.

In the doorway, she paused, looking at him over her shoulder.

She’d stood in the doorway, staring at him.

It wasn’t until he’d looked at her that she became aware of uncomfortable silence caused by what she’d said…yeah, that made things awkward.

“I know how I feel, Silence. If you don’t like it, fine. You don’t need to like it, and I’m not expecting you to feel the same way, but don’t tell me I don’t know what I feel,” she said quietly.

“You’re young. You’re adjusting to a new life, and right now, I’m all you know—”

She narrowed her eyes. “Oh, bite me.”