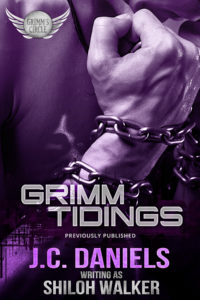 Never fear the pain. Fear what lies behind it…

In his mortal life, the only thing Jacob liked better than money as a good brawl—until he stuck his fist into the wrong fight, and a demon sent him spinning into a new life as a Grimm.

Now, a hundred years later, he’s been called to protect someone too much like himself. A woman who could let the chains of her past drag her down unless she learns to let go. A woman who fights like there’s no tomorrow, because she clearly doesn’t want a tomorrow.

Celine thought her second chance at life would be an opportunity to fix some of her worst mistakes, to set things straight. She couldn’t have been more wrong. She’s trapped by the past and her regrets, and nothing—not even her darkly sexy new trainer, Jacob—has a blade sharp enough to cut her loose.

Chains are Jacob’s specialty, but his help comes with a price. To her, the cost is her heart. To Jacob…something much more.

Warning: Contains a heroine with enough fight in her to put the 300 to shame. And a hero who knows how to take a punch.

The rattling of the chains was like a sweet music to him.

The heavy bag was reinforced, as were the chains, otherwise the first blow would send it flying across the room.

Still, Jacob thought maybe he might be able to decimate this one.

It might do something to ease the burn in his gut, although he wasn’t counting on it. He’d already been at it for hours—a run earlier, weights, anything and everything to punish himself, keep himself away from the house and away from Celine.

He was too selfish of a bastard to be doing this.

He should be more selfless.

He should be more able to sacrifice.

He should have been able to help her say good-bye without wanting to maim or destroy. Yet as she’d kissed her husband—yes, he’d seen it—he’d wanted to use the bastard’s head for a bowling ball. The threads of the dream had been harder to hold in place when he pulled another person in and he hadn’t been able to keep the distance he’d wanted to keep.

And each second he’d been forced to watch, every second he’d thought of the pain she must be feeling, it had driven him closer and closer to the edge of no return.

He was close to shattering. He could feel the shreds of his control splintering.

Something in the air changed—as the air currents brought her scent to him, Jacob rasped out, “Fuck it all.”

She was coming down here. Perfect. Just bloody perfect.

He needed to call Will, and soon. She was no longer in danger of being lost and there were any number of the Grimm who could teach her how to handle that newly emerging gift. Greta, perhaps. Maybe even Finn—nobody needed to understand control quite the way a pyrokinetic did. It seemed she’d learned from that bastard well enough. He could take over again.

She was watching him, watching and waiting. Shooting her a quick glance, he shifted his attention back to the bag.

“No thanks are needed,” he said without stopping his attack on the bag. He’d rather have a partner in front of him, somebody who could and would hit back—

And then Celine moved onto the floor and he noticed how she was dressed. Need, hunger, frustrated hurt ripped through him. She still loves him. You don’t need this pain in your life, he told himself as she stood there, dressed in loose shorts and a sports bra. Nothing else, unless he counted the gloves she was pulling on. Setting his jaw, he said, “I’m not in the mood for a match, but thank you.”

“You’re always in the mood for a match,” she said, rolling her eyes. “And although I’m not quite as astute as you are, you look like you’re spoiling for a fight.”

“Spoiling for a fight and sparring with a baby Grimm who can barely throw a punch are two different things,” he said coolly. He stopped the bag and turned away. He stripped away the gloves and tossed them to the bench in the corner. He’d head to the colony. Alone. That would do something to ease the burn. He’d come out bloodied and bruised, but he had enough years behind him that he could live through it. He thought.

Behind him, Celine sputtered. “Excuse me, but did you just insinuate I can’t throw a punch?”

“I didn’t insinuate. I said it. You’ve improved. You have a long way to go.” Now please leave me alone—

He heard the rush of wind but it wasn’t enough warning. She was fast. He knew this. But he didn’t always remember just how fast.

They hurtled to the floor and he took the impact before flipping and rolling them over. “Enough. I’m not in the mood,” he snarled, putting his face into hers and glaring at her.

“Wow. You really are pissed about something,” she said, arching dark brows as she studied him. “I didn’t know you could actually do that.”

“Do what?” He shoved upward, away from that lush, tempting body. He had to get away from her before he did something he regretted. Already his body had betrayed him and if Celine had been focused on something other than the fact that he’d insulted her, she would have noticed. It was a blow to his pride that she hadn’t noticed. Although she was still mooning over that fool who didn’t deserve her…

“Get pissed.” She drawled. Then her gaze dropped lower. “Worked up.”

The heat punched through him in a blistering, burning wave.

Worked up—so she had noticed.

“I’m not pissed,” he said, keeping his voice cool. Turning away, he went to grab a towel and wipe the sweat from his brow. He was dying inside, bit by bit, but that wasn’t anything like being pissed. He was frustrated, he was enraged, he was jealous. But that wasn’t the same as being pissed.

The soft whisper of sound behind him let him know Celine was now on her feet as well. He didn’t look up, but she wasn’t letting little things like eye contact dissuade her today.

“Okay. So you’re not pissed.” She came to stand at his side, nearly shoulder to shoulder. “Does that mean you’re not worked up?”

Turning to face her, he advanced on her, one slow step at time. Celine backed up until she came to a stop, with her spine resting against one of the rich, golden wood support beams at her back. Bracing one hand on the beam over her head. “I’m a man, Celine. I still have the same reactions to certain stimuli that any man would have. The fact that I’m a Grimm makes no difference.”

Her golden eyes bored into his, the pupils so large they nearly swallowed the irises. “So you’re just reacting to the fact that I’m female. I’ve been female for the past ten months,” she drawled.

Dipping his head, he whispered softly, “And I’ve wanted to strip you naked and shag you for the past ten months, almost from the second I saw you.”