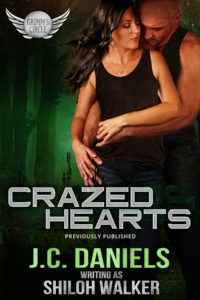 Ren has always danced along the fine line between being a little bit crazy and being overcome by a darkness that’s haunted him since his mortal days. As an empath, he prefers to live far from people who would leak their emotions all over him, so he’s not expecting the woman who drives right into the heart of his wood.  She has a cursed book with her and demons hot on her heels. Even more surprising are her abilities and the reaction Ren has to her.

Aileas is on the run.  She just isn’t certain if she’s running from something real or imagined. One thing is for sure, her brother is dead and she’s certain the book she found has something to do with his death. She really starts to doubt her sanity when she meets a hot but somewhat crazed man in the middle of nowhere.

He calls himself Ren, and although he doesn’t seem to be out to hurt her, he definitely wants something.  She just doesn’t understand what.  She does know what she wants though. She wants him, and the shadows and darkness she glimpses inside him don’t matter.  At least, right up until he claims to be a guardian angel.

“Why do you suddenly want me angry again?” he murmured, reaching up to brush her hair back from her face. He caught one thick curl between his thumb and forefinger and toyed with it.

Aileas scowled. “Just how can you pick up on so much?”

He shrugged. “I’d say habit, except I don’t know if that’s it. I prefer not to be around people much and I keep them blocked out when I can. I don’t know. You’re…easier to read than some.” He wrapped the captured curl he had around his finger, focusing on that task as though it fascinated him.

The force of his gaze was practically a drug in itself, she thought, licking her lips. She didn’t point that out to him though. Wasn’t really his fault God had given him eyes like that, right?

“Okay. I’m sorry.” She tried to look away, but she couldn’t. The grip he had on her hair sort of limited just what she could do, unless she wanted to leave some of her hair in his hand.

Besides, she really, really didn’t want to pull away just yet.

“Why would you think I’d do that?” he asked, his voice gruff now, and there was a flicker in his eyes. A flicker of nerves, of sadness, of pain.

Her heart started to race.

She tried to pull away and this time, when he wouldn’t loosen his grip on her hair, she started to panic. She reached up to tug his hand away, but that light contact, her bare skin to his, was all it took to deepen that surface connection. What fragile shields she had left in place buckled and broke.

His wavered. She could feel them shifting and swaying, and behind them, she glimpsed something else.

It rivaled her own.

That one coherent thought slammed into her mind just as Ren’s brows dropped low over his eyes. “Aileas,” he muttered, his voice whiskey rough and low.

She might have been embarrassed to have some total stranger be so completely aware of the naked need she felt. Except she felt the same from him. His hands came up and cradled her face and she knew exactly how he felt. Naked, raw need burned inside him.

Under it, there was a raw, screaming pain.

She wanted to soothe it.

But more…she just wanted him.

As his mouth came down on hers, she pushed up on her toes and met his lips. Him. She wanted him.

He tasted like wine and life and heat and man. She shuddered as he pushed his tongue into her mouth. She bit down on him gently as she slid her hands down the front of his shirt and then under the hem. The skin of his torso was hot, sleek and smooth. She wanted to see it, feel it under her hands and her mouth.

Pulling back, she fisted her hands in his shirt and worked it up. Her mouth went dry as he obliged her, stripping the shirt away and revealing a lean, rangy body, subtly corded with muscle.
Oh. Oh, man. He was a soft, golden tan from the waistband of his low slung jeans and up. His belly was flat and firm, the muscles of his chest defined, leading up to the kind of shoulders that looked liked they’d been designed just for a woman to rest her head on.

Or stare at. Or maybe stroke her hands down.

She couldn’t decide which one to start with.

She decided to compromise. Leaning forward, she put her hands on his shoulders and stroked them down his arms. She learned the feel of his muscles, loving the play of them under his skin as she pressed her mouth to his. She caught his lower lip between her teeth and tugged on it. He groaned and caught her head between his hands, holding her still.

Bewitching…bewitched, maybe she was one of the two. Bewitched, most likely. Or insane, maybe.

Might explain why she was all but ready to devour this man she barely knew.

Her head was racing. Completely, utterly racing, and she couldn’t get enough of touching him. Or tasting him. He muttered something against her lips, something she didn’t understand, and she didn’t care. It drove her insane, because when he was muttering he wasn’t kissing her and that meant she couldn’t taste him as well. But then she realized she could kiss other parts…like across the finely carved bones of his face, down along his jaw to his neck, along those shoulders she’d just been admiring. She bit down at the spot where his neck and shoulder joined and his body stiffened against hers, those elegant hands gripping her hips.

She barely heard him. Flicking her tongue against his skin, she scraped her nails against the flat circles of his nipples. When he shuddered, it sparked the growing heat curling through her.

Ren’s brain was about to explode. He was certain of it. Explode…or maybe just melt.

How had this happened? So fast?

Anybody else, just somebody to watch over Aileas so he could get the hell out of here. He couldn’t leave her here alone, but he couldn’t stay here either, not when his temper was this on edge…and then she’d looked at him. He’d caught a glimpse of those warm brown eyes, caught the echo of ravenous hunger inside her. And it clicked.

No more than he did.

Not this easily, at least.

But he looked at her and felt it…and suddenly he could understand why she wondered if maybe something had been dumped in her wine.

Her hunger sparked his, and every time he touched her he felt the echo of her pleasure in his own body. When he kissed her, he felt her pleasure as acutely as he felt his own, and he knew she was feeling it as well. This was the pleasurable side of their shared gift, although she might not entirely understand what she was feeling.

It was overwhelming, to put it mildly.

Cursing, he tore his mouth away. When she would have closed the distance between them, he closed his hands around her upper arms, holding her at a distance.

“You don’t want this,” he rasped, swallowing, fighting the need to pounce on her, tear her clothes off, fuck her blind. “You don’t know me enough to want me.”

Her eyes, burning hot and so hungry, stared into his. “Do I need to know everything about you to know I want this?”

“You should,” he said. Darkness stormed inside. The things he’d done…they twisted him, haunted him.