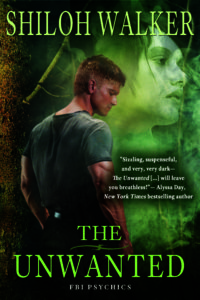 A Novella of the FBI Psychics

Can be read as a stand alone.

Destin Mortin’s psychic gift comes with an ugly twist—she excels at tracking down violent rapists. But it’s rough on relationships. Once, her partner Caleb was her everything: filter, shield, rescuer, lover. The only man who didn’t think her a freak. Then he walked away.

Destin turned her back on the FBI to work for a private agency, but now a particularly horrendous case has come up, and her boss wants her paired with only the best.

For Caleb Durand, leaving Destin was an act of self-preservation. Every time she flung herself headlong into dangerous situations, every time he nursed her through soul-crushing visions, he’d died a little more inside.

Now they are forced to work together one last time. Tragedy has changed them both, but Caleb knows if he lowers his shields for an instant, he won’t have an icicle’s chance in hell of resisting the temptation to lose himself in her wild power.

But to catch the rapist, it’s exactly what he’ll have to do.

He was painfully, acutely aware of the woman sitting off to his side.

Shifting his attention to her, he found himself staring at her profile. Her gaze was locked on some point just above Oz’s head, like she couldn’t be bothered to look at him and he guessed he couldn’t blame her.

After all, he’d walked away from her.

He’d walked away from this woman he’d loved more than anything…Destin Mortin…the woman who had slowly been killing him inside. She just hadn’t realized it.

His heart had withered away to ashes inside his chest over the past five years and he’d hadn’t ever planned on seeing her again. If it wasn’t for Oz, he could have probably managed to do just that.

Now? Shit, now he couldn’t remember how he’d felt just five minutes ago—when he’d been almost level. Not happy, never that. Not without her. But he’d existed. He’d been level.

Now it was like he was freefalling all over again.

And she still wouldn’t look at him.

Hell, maybe that was best. If he could get settled again before those big blue eyes shifted his way, he’d be better off.

Even though he knew every line of her face, every inch of her body, he wanted to relearn them, see if anything had changed.

And still, she hadn’t looked at him.

All he could see was her profile, the clear, elegant lines of her cheek, her chin. The straight line of her nose, her unsmiling mouth.

She was still so beautiful. And if he let himself, he imagined he could lower his shields and find himself lost in the heat of her. That wild, powerful soul. The temptation was strong.

No. Don’t, Caleb. You’re here for a job, only a job. With that thought firm in his mind, he did a quick mental check on his shields. All nice and solid.

So far, she hadn’t turned to look at him and that was good. Gave him a minute to settle himself before he looked into that beautiful face, before he lost himself in the vivid intensity that glowed in her ice-blue eyes. She’d cut her hair. Seriously cut, as in so short it almost looked like she’d buzzed the back of it. It was longer on top, falling in straight, silken tresses to frame her face. As he studied her, she reached up, pushing her fingers through the soft, black strands. Her nails were unpolished, clipped almost brutally short, not a single ring in sight. He frowned, trying to recall if he’d ever seen those pretty hands without polish and glittery rings.

She glanced at him over her shoulder, a quick look that let him see her face for all of, oh, maybe three seconds. Then she looked back at Oz. “What’s the deal, Oz?”

“A job,” Oz said, smiling a little. “You didn’t think I called you in here for cupcakes and milk, did you?”

Destin sighed and crossed one leg over the other. “I can always hope. I like cupcakes and milk.”

Her unspoken words hung heavy between. I don’t like this. Not at all.

I’m not too thrilled about it myself, sugar, he thought sourly as the ache in his chest twisted, shifted, settled.

It was a good thing he hadn’t come out here with any big expectations about getting over Destin. Because that obviously hadn’t happened.

Destin seemed about as thrilled to have him there as he was about being there, he decided, venturing a few more feet into the room. With his heart a leaden weight, he shifted his attention away from her to look at Oz.

It didn’t matter that he’d focused, meditated, prepared himself.

It was like preparing yourself to ride a tornado.

There was just no preparing yourself for the ride to come. You could know it was going to happen, but that was it.

Staring into her pale green eyes, he thought bitterly, Damn you, Oz.

If he wasn’t mistaken, there was amusement in her eyes.

Yeah, you be amused, scheming bitch, he thought sourly as he settled in the chair next to Destin’s. One nice thing about the fact that she wasn’t in the Bureau anymore, he didn’t have to school his thoughts quite so much.

She might pick up the odd and random thought, but she wasn’t his boss and he didn’t have to deal with her on the job once he finished here.

Destin crossed her legs, lovely legs left bare by the knee-length black skirt. It was almost severe in its simplicity, but she could have been wearing sackcloth and it wouldn’t detract from the sheer beauty of her.

Her skin was the color of sun-kissed ivory…she didn’t tan. She never had, but her skin would get this soft glow. Just the faintest bit of color. It made him think of peaches. And he wanted to stroke a hand down her thighs, press a kiss to her knee. Caleb had the weirdest feeling that if he closed his eyes, he could smell the sweet scent of Destin’s skin on the air and lust, need, punched through him.

Not what you need to think about.

Job. He was just here about a job.

Tapping his fingers on the arm of the chair, he said softly, “You want to tell me why I was put on a plane at four o’clock in the afternoon? By now, I ought to be settling down to eat dinner, watch some TV and relax. Instead…I’m here. Why am I here?” Flicking a glance at his watch, he checked the time. Play it cool. That was what he had to do. Play it cool so neither of them realized how hard it was to be here.

Play it cool and maybe nobody would realize the truth…he still loved the woman sitting next to him. He always would.