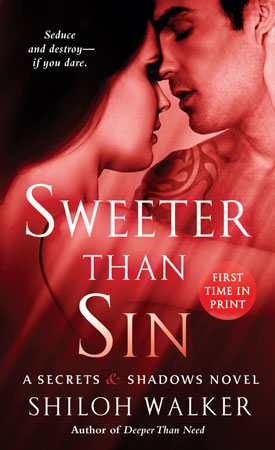 She hadn’t shared his bed again.

He hadn’t really expected her to, but there was still a hollow ache in his gut, while his dick throbbed, pulsed.  He felt it had been years since he’d touched a woman instead of just hours.

He could lose himself in her twice a day, every day, for the next ten years and he knew he wouldn’t lose the need he had for her.   He didn’t have ten years, though.  He probably didn’t have one more day—just those hours from that one night.

She sighed, reaching up to rub her eyes and he saw how pale she was, the strain in the set of her shoulders, the way she gripped her pen.  Talk to me. He wanted to go to her, demand she tell him something. Anything. Everything.

Once, she’d been willing to tell him her secrets.

But that had been back when they were friends.

He wasn’t sure what they were now, but she seemed to have forgotten how to share bits and pieces of herself.  Although maybe forgotten wasn’t the right word.  She just didn’t let herself do it anymore.  She didn’t trust herself, or she didn’t trust him.  Both, probably.

Instead of pressing his lips to the delicate curve of her neck, instead of sitting down close to her, he just moved into the kitchen, moving loudly enough that her head came up.  Her eyes moved to his and the faint smile on her face hit him square in the heart.  He’d do almost anything to see that smile stay on her face.

He might even cross out the almost.  What would it take to take the misery from her?  He just might be willing to do anything.

“Morning.”  He focused on the coffee she’d brewed, giving that simple task far more attention than it deserved, but he wanted to be in control before he sat down in front of her. It was kind of nice, he mused, having somebody sitting at the small table with him in the morning.

Especially today.  He wasn’t ready to be alone in his head.  A few minutes ago, he’d taken a call about the funeral arrangements for Rita. One of her cousins had called, wanting to make sure he knew about the visitation and the service, but halfway through that conversation, her mother had overheard and she’d yanked the phone away, screeching at him like a harpy.

By the time it was done, she’d threatened to have him arrested if he even showed his face. Adam didn’t know what he’d done to make her hate him, but he definitely didn’t want to think it through and brood alone.

“You don’t look like you’ve slept,” she said.  There was something nervous in the back of her pale gray eyes.

He wondered at it.  He’d seen her yesterday morning before he’d had to leave for work.  When he came home yesterday, she’d already been tucked into her bed and although he’d wanted to climb into the bed with her, that seemed a little presumptuous. Okay, a lot presumptuous.

Hadn’t stopped him from wanting to do it.  Just to hold her. Wrap his arms around her and feel her next to him as they slept, to know, finally, that she was here, that she really was safe and alive. That whatever had put that mark on her side hadn’t taken her away from him.

A hundred things danced on the tip of his tongue and he couldn’t say any of them.  A hundred questions, a hundred demands.  Since none of them were the right thing to say, he just shrugged.  “I never sleep well.”

“I didn’t crash until almost midnight.  You weren’t home.”

He grimaced and shrugged. “Comes with owning a bar.”  He could turn the late nights over to somebody else.  Step into the daytime work, stop being so hands-on, but the thought of being in the house, alone, through the long, endless hours of the night was just plain torture.

She didn’t answer, but the weighted silence coming from her seem too tense for her to be done.  Studying her, he realized she was looking at something.  Something small, cupped in her palm.

A ragged sigh slipped out of her and then finally, she put it down.

And he wasn’t even surprised. The sight of the round token, a dull bronze, sitting there on the table didn’t surprise him at all.  He couldn’t see which one it was and what did it matter, really?  If it had been bright enough in her room, she might have figured it out when she saw more of his tatts, but there was no hiding it now.

Besides, if she was around town long enough, she’d hear.

The chip she’d laid on the table was one he’d picked up from countless meetings. He’d stopped the AA meetings on a regular basis years ago, but he’d still hit one from time to time if the urge hit him too hard.  Sometimes, he’d drop in if he thought somebody he knew might need a familiar face.

The shame, the frustration, the guilt, shouldn’t those be gone by now?  He’d dealt with what he’d done.  Hadn’t he?  He’d climbed out of that hole, damn it.  Yeah, he still had to fight the need, but he was winning.

Usually. But there he was, fighting the twisting, ugly crawl of guilt in his gut, the hot, rush of blood as it crept up his neck as he stared at that token.

She knew.  Knowing that she knew hurt. It hurt his heart, his soul, his pride.

“How long?” she asked softly.

He dragged his gaze away from the token and met her eyes.  “How long what?”

Pushing away from the table, he moved over to stare out the window at the backyard.  He had to spend some time out there soon, dealing with the flowerbeds, weeding, all that shit he hated.  He did it because that yard had been his mom’s pride and joy and he’d take care of it for her.  And it was easier to think about that than to think about this conversation that she apparently wanted to have.

“How long since you stopped drinking?”

He looked back at her.  “Fifteen years, give or take.”  He didn’t tell her that he hit the bottle, hard, about the same time her boyfriend had started hitting it.  He’d been quieter with it.  He hadn’t gone out, gotten into fights.  He just went to work at the grill, came home.  Got drunk.  Day in, day out.  That was how he dealt with every day without her.

His parents saw it before anybody else.  Adam had very much been a functional alcoholic.  Nobody had seen it until the last few months before his parents died when he’d started needing more and more. That was when he started getting in trouble, picking fights, causing trouble wherever he could.

If it hadn’t been for what happened to his parents, he would have drank his way into an early grave, he suspected.

He turned and looked at her, standing there, holding that damn token.  That tarnished little coin.  And it had all started, that night.

Now she wouldn’t even tell him what had happened, why she’d made him lie.

“They’d wanted me to sober up for a long time.  It was the one thing I could do for them, so even though I did it over their graves, that was the final gift I gave them.”  He shrugged and looked back outside. “It wasn’t much of a gift, but it was all I could do.”

Silence was a dark, ugly weight and then the chair squeaked across the floor and he turned to watch as she crossed the floor to him. She stopped a few feet away, her eyes troubled.  “I don’t understand…you didn’t start drinking then? When they died?”

Then?  He stared at her.

Then he looked away.  “I grabbed my first drink the day I had to lie about your phone call.”

He went to go around her, intent on changing into some work clothes and sweating himself to death out in the backyard.  Manual labor would feel good.  Damn good.

Her voice, soft and shaken, stopped him before he hit the door.

Closing his eyes, he rested a hand on the wall.  “What?”