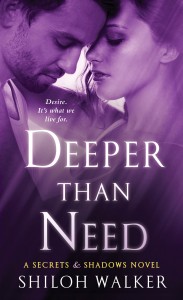 So does one man’s touch

Nearly a mile from the restaurant to here, made in silence, and each step of the way a memory rose up to slam into him.

Now, standing at the foot of the steps, Noah gazed at that big old house, remembered that day when he’d come out here, despite his father’s attempts to keep him from doing it. He’d ignored the police tape and would have barreled inside if old Max hadn’t stopped him.

Max hadn’t been able to keep Noah from seeing the bloody smears on the windows or the rusty stains on the porch. The lingering ache that had haunted him for so long had finally faded. But now he felt raw, exposed, as he stood there, ready to bare himself to the woman who was coming to mean everything to him.

Closing his eyes, he forced a breath past the band that had wrapped around his lungs, and then he turned his head and stared at her. The soft light of the fading day painted her skin a delicate gold and he reached up, cupped her skin.

“I’ve got things I need to tell you,” he said gruffly. “Things that are almost impossible for me to talk about. But before I do . . .”

He dipped his head and pressed a kiss to her lips, felt her soften against him, reach for him. He caught her wrists as she reached up to cup his face, felt the maddening beat of her pulse. “The past twenty years of my life have been nothing but a cloud. Everything was just . . .grey. There was no color, no light, no laughter. All that changed the minute you and Micah came barreling into my life. I don’t want to lose that.”

“There’s nothing you’re going to say that will change what I feel. I . . .” She paused and blew out a breath. “Sometimes I get a little scared about just what I feel, considering that we really haven’t known each other that long. But . . . you felt right to me the first time I looked at you. Whatever you have to say to me isn’t going to change the man you are.”

The words rested on his heart, almost painful yet still enough to make him catch his breath. Hope could cut deep sometimes.

Trinity stood at Noah’s side as he stared at her house. It threw shadows across the ground and she felt their weight, like the shadows had been forged into her very soul.

But looking at Noah, somehow, she realized the shadows went a lot deeper.

He pulled his key ring out. “I’ve got a set. I had it with me from earlier.”

“Okay.” She went to reach for it, but he was already walking toward the house. Something about the way he moved made her think he was on a mission—he had a focus, one he was bent on carrying out.

Following along behind him, she watched as he stopped just at the top of the porch’s steps, his head turning just a bit to stare at something along the side. She followed the direction of his gaze, but whatever it was he was looking at, she didn’t see it.

He paused at the door, waiting for her, and they went inside together.

Her heart lunged inside her chest, racing like it was trying to jump completely outside.

“I hate this house,” Noah said quietly after he’d shut the door behind her. “I never did like it, even as a child.”

She looked up at him, but he still had that focused, intent look on his face.

“My father did some of the earlier rehab work on it, back about twenty years ago. After . . .” He stopped and reached up, rubbing a hand across his chest.

She caught it before he could lower it completely. “After what, Noah?”

He shifted his gaze down and met hers as they twined their fingers. “I don’t know why nobody has told you,” he murmured, lifting his free hand and cupping her cheek. “Why hasn’t anybody told you?”

The knot in her throat was enough to choke her. Some tiny little voice inside her head whispered, Maybe you should leave.

But the rest of her told her to take another step. So she did. She took another step and slid her free arm around Noah’s waist. “Maybe they were just waiting for you to do it. So why don’t you get on that?”