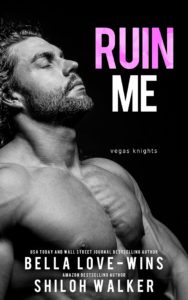 Angel
I should know to keep my guard up when this dark, damaged stranger saves me.
But I don’t.His tortured soul draws me in for one hot, sinful Vegas night.

Then I learn what he is.

I should back off, but it’s already too late.

I’ve fallen for the one man who’ll ruin me.

Author’s Note: Ruin me is a full length (64,000 words) steamy standalone romance with no cheating, no cliffhanger, and a happy ever after ending.

Content Warning: This story contains some dark story elements which may be disturbing to some readers.

I think maybe I experienced hunger something like this—just about a hundred shades paler. That was after giving up sweets, sugar, chocolate, all of it, for six months while trying to lose weight to fit into a dress for a friend’s wedding.

It wasn’t worth it.

Gorging on salted caramel ice cream every night for a week straight after the wedding?

That was worth it.

He sank into me, tongue and teeth, and I whimpered as I gave into him, unable to do anything else.

One of his sure hands freed my hair from the loose ponytail I’d twisted it into. I moaned when he combed the thick, heavy mess down, massaging my scalp as if he knew how much the weight of it got to me. His tongue licked at the roof of my mouth while the fingers of his hand slowly combed, then tangled in my hair, wrapping the long strands of it around his fingers until he had total control of my head.

When he tilted his head to look down at me, my heart was already racing.

“You sure you want this, pretty angel?”

Something about the way he said it made me wonder if he was using my name or just an endearment. It didn’t matter. I didn’t want to be Angel Halliwell in that moment. I just wanted to be a woman in a dark, impersonal room in some Vegas hotel, alone with a man who was turning my blood to something hot, sweet and thick.

“Damn sure,” I said, curling my arm around his neck and tugging his mouth back to mine. “Kiss me again, Mac. I really like it when you kiss me.” 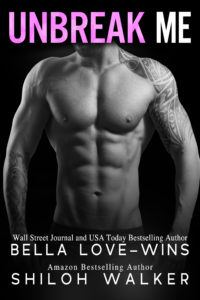 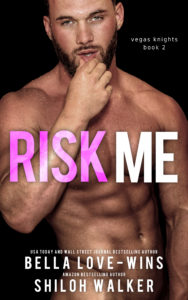 She was mine before I ever laid eyes on her.

It took an instant to know we were meant to be.
She wanted an escape and my arms were wide open.
She endured a life of pain. I could give her solace.

She saw baggage. I saw hope and connection.
But most of all, to her, I was forbidden.
I wanted her more because of it.And just when I thought I had her, we were ripped apart.One innocent act to escape forced our families onto a collision course.
I was fooled into believing she could risk everything for me.
Her hands were tied.
She was more of a prisoner than I’d even thought possible.
She was just out of reach.
And watching, waiting and wishing wouldn’t bring her back to me.
But people like us never got lifetimes of happiness.

We didn’t get fairy tale endings.

Our love story was destined to end in tragedy.
Risk Me is a full length (60,000 words) steamy standalone romance with no cheating, no cliffhanger, and a happy ever after ending. Content Warning: Contains sensitive, potentially polarizing topics, and emotionally dark story elements that may be disturbing to some readers. Intended for 18+ readers.
Excerpt

Deep, rich, smooth as molasses and just as sweet, it rippled and poured all over me and I had to suppress a shiver. It was hard to believe, but LeVan Vanderbilt’s voice had gotten even better with age. From the corner of my eye, I saw him glide in front of me—and I saw his hand come up just as Rose Dress went to throw her red wine in my face—and while I might not have been wearing Armani anything, I was wearing a pair of Louboutins and a dress of my own design.

“Security is going to escort you out,” LeVan said, standing slightly at an angle to me as he spoke. “If you behave, you can stay in the hotel. If not…well, David can decide if he wants to join you or not. He’s welcome to remain at the party, but you just had your ticket revoked.”

He’d cut his hair. I’d noticed it earlier and wondered when he’d done it. All the promo material around the hotel still showed him with the long, heavy dreadlocks, but now his hair was cut short, close to scalp. It didn’t matter. He was still as beautiful as an angel, carved by the hand of a master.

“Thea. It’s the Magic Man.” Miraculously, Nicky had calmed down almost completely, now twirling an overlong lock of hair instead of smacking his fist against his thigh—or his head.

“I know, buddy. Are you good?” The question came out of habit more than anything. My gaze was still on LeVan, the air in my lungs shrinking away to nothing.

LeVan turned then, the movement almost obscenely slow. I squeezed my eyes shut and sucked in a breath before looking back at him.

He’d started growing at thirteen and hadn’t stopped until nineteen, topping out at a lean and sexy six foot three. Not petite by any stretch of the imagination, I stood five eight in my bare feet and I’d deliberately picked a pair of heels that would give me another two inches, but he still had five of them on me.

“Hi, LeVan,” I said, ignoring the chaos coming from behind us as security escorted Rose Dress away.

A second later, his mouth was on mine and I wrapped my arms around his, leaning into him like nothing and no one else in the world existed.

Dimly, I heard a couple of people whistle, maybe even a whoop or two.

But nothing mattered but the feel of his mouth on mine and the hand that had arrowed into my hair.

He held on like he’d never, ever let go.

And I was just fine with that.

Amazon
Look for the free prequel 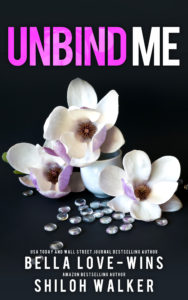 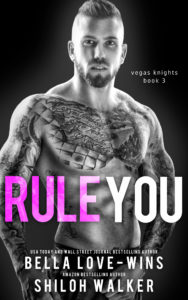 I like ice in my whiskey and virgins on their knees.
Sly
Aside from my whiskey collection and back-alley brawling, virgins are my secret guilty pleasure. People can judge me all they want, but I don’t care. Not when I was the street rat they walked by with their noses turned up. Not when I had to talk with my fists to stay alive.

My life on the streets made me what I am today.
Cold.
Heartless.
Callous.
A sadistic bastard.
It all plays out in my bed, and the world can’t get enough of it on stage. They just don’t know that I was all of that and more, long before I decided to hide behind this image.

Then I meet Emmy.
The only thing hotter than her tempting curves and mile long legs is her smart mouth that was made for sin. And when I find out she’s a virgin, it’s game over. Emmy belongs in one of two places: in my bed or on her knees. I’m supposed to keep my distance. Because of who she is, I shouldn’t cross the line, but she’s the thing I desire most.

I just hope she realizes there won’t be a happy ever after with me.
You can’t fall in love when there’s venom where your heart should be.

Authors’ Note: Rule You is a full length steamy standalone romance with no cheating, no cliffhanger, and a happy ever after ending. Each book in the Vegas Knights Series can be read in any order. Trigger Content Warning: Contains sensitive, potentially polarizing topics, and emotionally dark story elements that may be disturbing to some readers. Intended for 18+ readers.

“Son of a bitch,” I muttered.
Reaching up, I rubbed at my eyes, certain that what I saw in front of me wasn’t really there.
But when I lowered my hands, sure enough, the naked woman locked in some sort of weird yoga pose was still there…yoga-ing.
Naked.
Completely naked.
Her seriously tight ass was thrust up in the air at me and tired as I was, confused as I was by the entire thing playing out in front of me, my dick stood up and took notice. I could see the folds of her pussy and dark blonde hair.
I was about two seconds away from having to adjust myself when she straightened in a slow, fluid movement and thrust her arms high overhead, her slim back arching.
She had pale blonde hair, thick streaks of pink and blue—
Shit.
The hot little not-caterer I’d seen at Angel’s baby shower almost two weeks ago.
Just as recognition hit, she shifted her pose again, turning.
Our eyes locked, my green with her blue-green, and her mouth dropped open.
The music deafened me to anything she might say, but I didn’t need to hear her to know what she’d just said.
Her mouth—a very perfect mouth—formed the words What the fuck?
Me, I’ve never been one to show much shame for anything and she was the one doing yoga naked in my best friend’s apartment. I lowered my gaze to her tits and stared.
They were damn near perfect tits, too. Apple-sized, topped with dark, pert nipples that made me want to bite them. Under my gaze, those nipples stiffened, although I didn’t immediately assume it was because she was feeling the same punch of heat I felt.
No, all sorts of things caused that reaction and judging by the way she snapped to rigid attention, her small fists falling to her sides as she straightened, anger was behind that telltale reaction.
Idly, I decided it was a good thing that men didn’t get hard-ons when they got pissed, the way a woman’s body might cause her nipples to tighten like this pretty lady’s were doing. I’d end up spending half my life fighting down an erection if that were the case.
She glared at me as she strode over to the couch and grabbed something. Sadly, it was a shirt. As she jerked it on over her head, I got another look at the curls between her thighs—a front view this time—and I had no doubt that pale blonde hair on her head was natural.
A split-second after I decided that, the music cut out and I looked up to see her holding a remote in her hand.
“Thanks for that,” I said. “I was about ready to drill a hole in my head to make it stop.”
She pursed her lips, a prissy, uptight look that was entirely too appealing. But hell, I’d just seen her naked. She could tell me to kiss her ass and I’d be intrigued.
“You frequently go around ogling strangers?” she demanded.
“Nah, only when they’re naked and doing yoga in my best friend’s home.” I paused, then added, “I assume Mac knows you’re naked and doing yoga in his home.”
She didn’t strike me as crazy, but one never knew.
She sniffed, that prissy look settling back on her face. “Considering the fact that I’m currently staying here, I don’t think he minds if I’m doing yoga.”
“Naked yoga?” I fired back. She was staying here? Who the fuck was she to be staying with Mac? “You a friend of Angel’s?”
“No. I’m her cousin.” She fluffed her hair and I noticed that the pink still hadn’t faded from her cheeks.
Well, shit.
My dick slowly started to deflate.
I had few rules when it came to sex, but I didn’t fuck women who were connected to my friends.

available on Amazon/Kindle Unlimited. Will be made available on other platforms in winter 2019