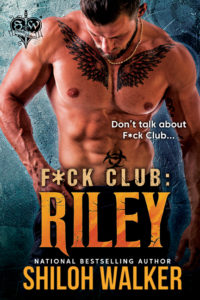 The first rule …we don’t talk about it. We just do the job and get paid.

Riley went to her.  “Just promise you won’t go back to him.  He’s hurt you before and you went back.  If you do it this time…”

He stopped in front of her and she tilted her head back, meeting his eyes.

He was too close.

But he didn’t back away.

He needed her to understand.

Reaching up, he cupped her chin.  “Don’t go back to him.  The next time he hurts you, I’m going to kill him, Bree.”

“I’m going to.  So save us all the trouble and just don’t go back to him.”

She blinked, then, nervously, she nodded.

Her tongue slid out, wetting her lips.

Her breath was a soft, shaky sigh and she reached up, closing her hand around his wrist.

Her gaze flicked to his mouth.

A groan rumbled out of him and he thought he might explode if he didn’t touch her, kiss her…something.

“I need to…ah…” Do something. He couldn’t even think of a stupid lie, much less a convincing one.

He pushed his fingers into her hair and she blinked, caught off guard.  Her eyes widened when he dipped his head, fluttered closed as he caught her mouth.

He didn’t close his.

He wanted to see her, almost had to.

Her mouth was damp, only open a little, but it was enough. He licked at the seam of her lips, teased that slight yielding until she gave more.  She reached out and braced her free hand on his shoulder, clinging to him.

He paused, lifting his head to study her.

She licked her lips, made a sweet sound deep in her throat.

And her eyes were still closed.

So he did it again.

This time, he backed her up until she was trapped between him and the nearby recliner. Bracing his hands on the high back of the chair, he caged her in, although it was an easy enough cage to break away from and he didn’t lean his weight in on her.  She was so nervous, so hesitant, it set his every radar he had off.

Her tongue flicked against his.

He groaned in approval and cupped the back of her head, angling her in closer, while fighting the urge to make the kiss deeper. More.

But his brother shouted his name and even though he heard it, he didn’t really hear it and what was he supposed to do anyway?

A split second after he head the noise, something hit him in the back of the leg.

Then it hit him again, and he finally realized somebody was yelling at him.

Somebody small and furious.

“Leave my mommy alone!  You’re not going to make her cry, too! I won’t let you!”

Toby wound up, ready to swing at him again, his weapon—a wine bottle that had once held flowers…courtesy of Charli—clutched tightly in his left hand.