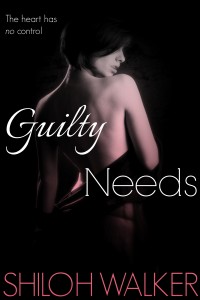 I know you love him…

Not the words you want to hear from your best friend. Especially when the him she is talking about is the man she’s married to. But when Alyssa Hutchins said those words, Bree realized her best friend knew the one secret she’d hoped to keep hidden for always.

Just before she died, Alyssa asked Bree to promise her something, but it’s a promise that Bree isn’t sure she can keep.

Chased by guilty needs and taunted by dreams where Bree offers so much more than comfort, he returns home to close the book on the life that ended with his wife’s death. But he comes face to face with Bree and it sets everything inside him to burning all over him.

These two battered souls long to be together, but something unspoken lingers between them…

He never realized he’d fallen asleep until the phone jerked him awake. He jumped, for a moment not recognizing where he was and his mind automatically went to Alyssa—he needed to check on her…but then he remembered.

In the distance, he could hear Bree’s low, quiet murmur and he blocked the sound of it out, tried to still the storm churning inside him. He needed to get out of here. The rain was still coming down, although from the sound of it, the downpour had lessened a little. He came up out of the chair, wadding up the blanket Bree must have draped over him. He threw it on the footstool and headed out of the den, hoping he could grab his jacket and slip outside.

Remembering that his car was still at the funeral home, he paused, but then just shook his head. He didn’t give a damn if he had to walk. He didn’t really have a destination in mind anyway—just not home. That was the only thing that mattered. He didn’t know if that house could ever be home again. He’d built it for Alyssa.

It hit him then, just as he went to grab his coat from the hook hanging by Bree’s side door. It hit him like a ton of bricks dropping down to crush him. Slamming a hand against the wall, he tried to keep from buckling under the weight. What hit him weren’t tears—such a simple term couldn’t explain the pain that boiled up from deep inside and threatened to kill him as it clawed its way out of him.

He never heard Bree come in, just knew that suddenly she was there, slipping an arm around his waist, then the other, holding him as he finally let himself acknowledge reality.

There would be no one last chance to hope and pray for a miracle, no more nights where he could lie awake and watch her while she slept. Gone.

Her back was on fire and her left leg was so numb, she was pretty sure it would take an hour just to be able to get any feeling back in it—if she was ever able to move. But she didn’t care, didn’t say anything. They were half-laying, half-kneeling, with his head in her lap and the fingers of one hand twined with hers, holding on as though he’d never let go.

Her own tears were blinding her, but she blinked them back.

She wasn’t sure when the silence between them started to change. It wasn’t a comfortable silence, or an easy one, but the grief between them kept it from being awkward. But it changed—more on her part than his—or at least she thought it had. But then she realized that his free hand rested on her thigh and his thumb was stroking back and forth. Through her skirt, she could feel his warmth and every slow stroke was enough to make her heart skip a beat. He wasn’t even aware he was doing it, she suspected—any more than she was aware that she was lazily stroking a hand through his silky hair.

The tension spiked between them and slowly, Colby lifted his head. His pupils were dilated with just a thin sliver of amber showing. The hand on her thigh stilled—tightened. His gaze dropped to her mouth. She hated how easily her body reacted, hated that she wanted more than anything to close the distance between them and press her lips to his. Hated it. Just as she hated knowing that she was weak enough to give him anything he might need, even if it was just some sort of comfort sex.

She hoped that wouldn’t happen, yet somewhere inside, part of her hoped it would. Colby might need comfort, but she needed him. She’d always needed him and she’d never had the chance.

His lashes drooped low, shielding his gaze. A harsh sigh shuddered out of him and then he shoved to his feet. Without looking at her, he walked out of the kitchen, pausing only long enough to grab a key ring from the small bowl by her phone. She heard the engine of her bike revving out in the driveway. As he pulled away, she thunked her head back against the cabinet at her back and closed her eyes.