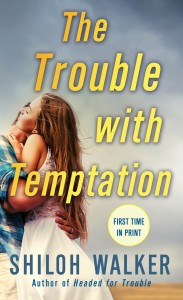 “Think you can sit up for a few minutes?”

Instead of telling him she didn’t want to, she sighed and wrapped her hand around the bed railing.  She already knew she was ridiculously weak.  Things had explained to her and she was trying to wrap her head around everything.  She’d been in a wreck.  She’d hit her head.  She’d been in a comatose state for seven days and sometime during the night, she’d started showing signs of reviving.  She’d been awake for…how long? She didn’t know.

She wanted to get up.

She wanted to walk.

She wanted something more than the ice chips they’d given her, but any time she asked for water, they said they needed to finish the assessment first.  If she heard that A word one more time, she had an A word for them…as in kiss my A-S-S.

She sat up—or tried—and her body protested the movement.  The nurse, a kind, older woman came to help steady her until she had her balance. Once she was mostly upright, the doctor studied her for a moment and then nodded, pleased.  “Your motor skills are coming along nicely, almost like you napped for the week.”

“You’ll get your strength back.”

She wanted to ask if everything else would come back.  But she was afraid.

“Let’s finish up here so you can—”

She lifted her head up at the sharp sound of the nurse’s voice.  Her heart started to pound at the sight of the man in the door.  Tall and broad, his face brushed with stubble and a mouth that fell slightly open at the sight of her.  That was fine, because she seemed to have trouble closing hers just then.

He had a powerful face, framed by vivid red hair.  That hair was disheveled, making her wonder if he knew what the idea of a comb was. But even as she thought it, she had the image of him driving a big, long-fingered hand through that hair.

Green eyes.  Such brilliant green eyes.  He stared at her and she felt the punch of his gaze like he’d reached out and touched her.  Images swam through her head.

Then the nurse was standing between them.

“Do you mind, Mr. McKay!” she snapped, shoving him back out into the hall and slamming the door.  “That boy, I swear.  Ms. Parker, I’m so sorry.”

The doctor’s head whipped up to hers and the stethoscope he’d had on her back fell away.  “You remember him?”

Hannah swayed on the edge of the bed and the doctor had to steady her.

“His name.”  She laughed weakly.  “I don’t remember mine, but I remember his.  Can you explain that to me?”