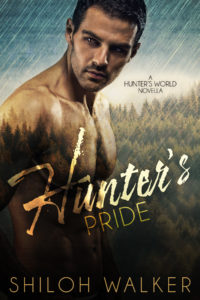 A woman determined to find answers, a man sworn to keep secrets

She was a child when it happened, an innocent brutalized by a man who was meant to protect her. When Kennedy ran, he came after her with every intention to kill—only to find himself face to face with creatures no rational human could explain.

Now, fifteen years later, Kennedy has returned to Pride Mountain, intent of finding out more about the creatures that saved her. Are they animals? Or something more…

Duncan Pride remembers Kennedy. But the woman he sees is nothing like that terrified child he saved. But he can’t let her learn the truth of Pride Mountain. He doesn’t count on her stubbornness, or her courage. He also doesn’t plan on falling in love with the willful, beautiful woman.

He can’t let that get in the way—his Pride is counting on him.

This book has been previously published and has been repackaged.

Unable to pretend it was just her imagination any more, Kennedy sat up and turned to stare in the direction of the door.  It was so damned dark in there—she could barely make out the dark shape standing in the shadows.

His eyes, though…she could see his eyes, flashing at her in the dark.  Golden, glowing, eerie as hell—

“The cats you’ve been looking for—why?”

Kennedy blinked.  She hadn’t said a damn thing to anybody.  How in the hell did he know?

“I…ah—I’m not looking for any cats,” Kennedy said, and she cursed as she heard how wobbly her voice was, how weak and pathetic she sounded.

“Don’t give me that.  I saw you in the forest—I know you’ve been looking for them.  Why?”

Ooookay…  Kennedy licked her lips as she shifted on the bed.  “Do you mind turning on the light?”

Narrowing her eyes, she demanded, “Okay, how about telling me who in the hell you are and how you got in here?”

“I picked the lock.”  She thought for a second she heard the slightest bit of humor in that deep, grumbly voice.  The sound of it made shivers run up and down her spine, but she didn’t really feel afraid.  Not any more.

“Who in the hell are you?” she snapped, exasperated.  She sure as hell couldn’t place that gruff voice and it was too damned dark for her to see—although his eyes, they continued to gleam at her.

“If I wanted to tell you who I was, I would have made an appointment, sweetheart.”