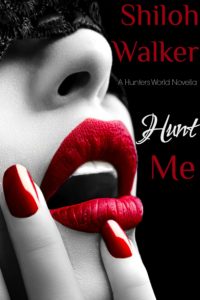 Hunt Me – A Hunter’s World Novella

Drew Quentin has been crazy about sexy Dakota Coulter from the moment he met her, but after two years of dating, he still doesn’t have her phone number. Sooner or later, a man has to move on.

That was the plan. But the night he broke things off, things went from bad to worse…and he figured out some of her secrets…bloodthirsty secrets.

Dakota Coulter is having a lousy night. The man she loves just broke up with her. And she can’t even take an hour to sulk, because duty calls—and as a Hunter, she must answer.

The splash of murderous red on her nails didn’t do much to lift her spirits, but Dakota was pleased with how she looked, at least. The dress might have been a bit overdone, but red looked good on her. It clung to her curves, stopped just a bit short of her knees. And she could still move.

She’d passed on the really cute Jimmy Choos with the ankle straps, settling on a simpler pair of heels. She could run barefoot without falling. Even though falling wasn’t likely, running flat out in heels wasn’t as easy as people might make it seem in books or movies.

On the job, Dakota was practical, and even if she was taking some time to get dumped, she was still working. The only time she wasn’t working was when she crashed in her cabin up in Maine or when she got pulled into Excelsior for one thing or another.

The life of a Hunter.

Sighing, she made one last study of her reflection, pulling the brush through her dark brown hair. It curled around her mostly naked shoulders, the ends coming down to drape around her breasts. She looked good. She was honest enough to admit that. She looked good…like a woman who wanted a man to know it, too.

“Damn it.” She swallowed and turned away from her reflection, determined not to spend the next hour thinking about this. Next hour, minimum, because even though she wasn’t meeting Drew until midnight, she’d be circling around the city. Circling around, watching things. Making sure she wasn’t being watched. There were paranormal creatures aplenty here.

Every damn time she came through, she had to settle trouble. None of it was bad. If it had been bad in the major category, a bigger bad-ass would be here.

Dakota had yet to grow into full bad-ass potential.

But she was good enough to play cop and if things got bad, call in the big guns. Part of playing cop meant being careful.

The life of a Hunter.