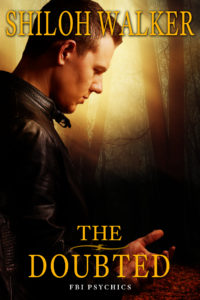 An untrained psychic, a marked man—all odds are against them.

Nyrene Goldman is having one hell of a bad week. First she finds out that her boyfriend isn’t just a two-timing bastard. He’s actually married, and she’s the other woman. Then she’s in a car wreck. The next day she wakes up with the headache to end all headaches…and she’s hearing voices and seeing visions. When those visions start to come true, she doesn’t know whether she’s going crazy or if the wreck rattled her brain.

A trip to the hospital puts her on a collision course with one seriously sexy cop. At the sight of him, everything in her screams DANGER!

Officer Bennett “Dev” Deverall is a man with a target on his back. One of the few good police officers in a nest of vipers, he’s doing his damnedest to put together a case to take out the dirty cops—before they get him. If there’s one thing he doesn’t need, it’s a damsel in distress, but while his armor might be a little tarnished these days, he’s never been one to walk away from somebody who needs him. The problem is, once he gets entangled with one Nyrene Goldman, his already screwed-up life gets even more complicated.

She knows things she shouldn’t know, tells him things nobody should know, and he can’t help but wonder if this gorgeous woman was put here to trip him up at the worst possible time.

But after a few too many close calls, he’s forced to admit there’s something weird going on with the pretty nurse. Something that can’t be explained.

The two of them wind up on a collision course with fate and now isn’t the time to doubt themselves, or each other. Not if they want to survive.

A hard fist slammed on the door and she jumped, unable to muffle the shriek before it escaped her.

Find out what’s going on.

Her head started to pound as she looked away from the computer to stare at her door.

There was another knock and she eased her way around the coffee table, leaving the laptop where it was, as it was.

She’d think about that email, and all its assorted creepiness, later. After she saw who was at the door.

You know. Her imagination filled in the blanks—big and blond, with his ice-blue eyes and impassive features, Ben Deverall was a mouthwatering piece of work. Too bad the terror had dried all the spit from her mouth.

The sound of his voice didn’t do anything to soothe her uneasiness.

Why couldn’t she have been wrong?

Why couldn’t he be the Easter Bunny? A cute little girl selling Girl Scout cookies? Anybody other than the cop, because that would mean she hadn’t just known.

She swiped her hands on the soft cotton of her pajama pants and paused for a second to look down at herself. She’d changed when she got home, into something warm and comfortable and soft, desperate for the comfort. Now, though, she wished she hadn’t.

The long-sleeved cotton shirt wasn’t quite thick enough to disguise the fact that she wasn’t wearing a bra and the slogan written across it in vivid, pink font was funny, if you knew the context. She’d gotten it at a book convention she’d attended a few years ago.

But Dev wouldn’t know the context and now she had to open the door with some rather risqué words scrawled across her boobs like an invitation—You’ve been a bad boy…go to my room.

The irony of it all—if it wasn’t a terrible situation she found herself in, having Bennett Deverall in her room wouldn’t bother her a bit.