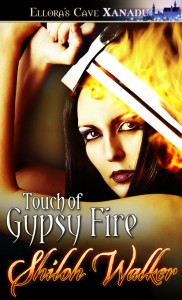 The half-breed daughter of an elvish prince and a gypsy lady—she’d heard it said that a match between an angel and an incubus was better suited—Tyriel fought evil and traveled her world as a hired sword with all the passion of the gypsies. She had grown used to hiding her loneliness behind laughter and magick.

Until Aryn…the powerful, sinfully seductive swordsman catches her eye, her heart and her soul. She never expects a happily ever after, but neither did she expect what would happen when she tried to outrun her heartbreak.

When a deadly evil from their past comes stalking Tyriel, Aryn must look deep inside himself to find the truth.

The problem will be finding the answer in time.

Tyriel’s time is running out.

Aryn’s eyes had roamed over her, like a hand, firm and strong, almost palpable in its intensity. Her nipples were still peeked, pressed hard against her silk blouse, the gay colors of her clan bringing false color to her skin. Under the long skirt, she shifted her legs, crossed them, the leather of her thigh high boots hugging her legs. She was wet, weeping with want for him, and his words rang once more in her ears…So I now I fuck her to keep her safe?

She hardened her heart and willed magick into her playing, uncaring that it was morally wrong. She wanted, needed that money…she was leaving in the morning, and going home to Eivisa.

She ignored his low voice to her right. A dark shadow came through the door and her eyes landed on the newcomer as a cold sinking fear slid through her belly. There lies death…

Some time had passed. Aryn had gotten his own room, her sharp hearing told her, a large comfortable clean one, the best the inn had to offer, and after that he accepted some ale and food from the passing barmaid. She had offered him a bit more as well, and Tyriel wondered sourly why in hell Aryn had told this one no.

Shoving it out of her mind, she let her eyes wander back to the man in black, whose eyes and face she couldn’t see.

She stared at this man, this man who held her death, who wore the long black cloak and played on as Aryn’s hand, hard, firm, familiar came up to rest on her neck, oddly possessive, warm. As his skin touched hers, the black, terrified feeling in her belly lightened and died away. Something inside her whispered, Forget your pride, your heart. Stay with him… Part of her knew that once she left him, she was no longer safe from whatever blackness Irian had foretold.

A blackness that seemed to linger around the man who had settled in a corner, staring at her. With malevolence and malice.

Aryn lowered his head and whispered into her ear, brushing aside her curls, “Stop playing, now, or I’ll carry your fine little ass out of here.” He squeezed her neck in warning as he spoke then stepped back and studied her, waiting.

She finished the song with a flourish and stooped to gather her money. With a quick, expert eye, she figured the money would buy the basic supplies she needed and then some. And she could always do some busking to earn a little extra. Scooping it into her pouch, she stowed her flute but before she could toss her pack over her shoulder, Aryn had taken and moved through the small door to the side that led to the rooms.

“What?” she demanded coldly, folding her arms over her chest and staring him, refusing to relinquish the flute or her smaller travel pack when he reached for them after closing the door behind them.

She heard Irian…not his words…just a murmuring, in the back of her mind. With a snarl, she said, “Stay out of this, you bloody, blasted enchanter.”

Aryn lifted his eyes to her face, those dark, dreamy blue eyes that had totally captured her heart almost from the first. Irian shimmered into view and stared at Tyriel as well, his intense, hungry gaze rapt on her face. You canna understand, Tyriel, love. You didna hear all—

Aryn whispered quietly, “That’s the whole problem. That’s what we both want. But I am not going to condemn myself to pining after a gypsy-Elf who will be forever young and lovely while I will soon fade away. I am mortal, just a man. You are not, you have the blood of divine beings in your veins.”

Tyriel felt her mouth tremble as she stared into Aryn’s eyes and saw an answering heat there. But it was only heat. Only heat, not love nor need. “You have never been just a man, Aryn of Olsted. But I will not stay here any longer. And we both know neither you nor Irian can force me.” She turned her back and headed for the door, uncaring that she didn’t have her other pack, just needing to leave.

She canna go…I am sorry for breaking my word.

Aryn opened his mouth, unaware of Irian was talking about, and not really caring. He wasn’t letting her walk out that door. But he never said a word, never remembered anything beyond the sight of her slim back covered in black leather, all those wilds curls spilling down to rest just above her ass, the gay red of her sleeves moving in a silken whisper as she turned one last time to glance at him, her eyes glowing luminously.

And then Irian swarmed up and overwhelmed.

Tyriel glimpsed Aryn in those eyes, grim, determined. But then his eyes went blank. And then hungry, sorry, dark…Irian…

“Does your word mean so little?” she asked softly.

“You mean more.” His voice was deeper, slower, gruffer than Aryn’s, his eyes hotter, heavier. “You canna leave us, him. You are safe with him. You will stay.”

“Irian, nebaste…” she whispered, half heartedly as he backed her up against the door. “Stop…please…this solves nothing. You are not Aryn. I am not in love with you.”

“But part of you wants me almost as much as you want him.” Irian aligned Aryn’s long, rangy powerful body against hers, his thick, throbbing cock fitting into the notch between her thighs. “Ye canna deny me that, girl…can ya?”