this title was previously published as Whipped Cream and Handcuffs 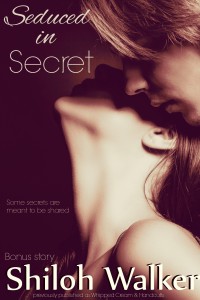 Anybody ever tell you that you talk too much?

Despite her frustration, she laughed.

When are we going to talk? As in, really talk?

Are you sure you’re ready to?

Holding her breath, she waged a mental war and then told herself, “It’s now or never.”

You knew it wasn’t right for me. I don’t know how we know each other, but we do. I can feel it. So I broke it off.  It’s done. Now I want to know what’s next. When do I get to meet you?

For a long time, there was no answer.

I dream about slipping into your room.

You’re asleep. You don’t even know I’m there.

Then I climb into bed with you and bring you awake with my mouth, with my hands, with my body. By the time you really wake up, I’m already fucking you, Tess.

Tessa had to squeeze her thighs together.

Tipping her head back, she stared up at the ceiling and waited until her head cleared before she tried to formulate an answer.

Don’t you think that will go over better if we meet? Talk?