Skip to content
Standalone.  Not related to any other series/book 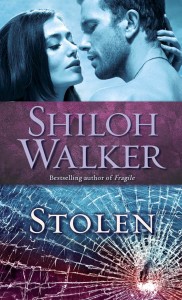 Shay Morgan has stayed hidden for a long time. Living a reclusive life in Earth’s End, Alaska, she’s as far away as she can get from the trauma of her childhood and the man who hurt her long ago. But terror takes over Shay’s life yet again when an unknown stalker steals away the fragile peace she’s built for herself—targeting not only her but the one man who’s ever managed to get past the walls she’s built around herself.

Elliot Winter has lived through being falsely accused before—it ruined his military career. Now it’s happening all over again. And this time, his accuser is a twisted impostor who’s targeting his ex-girlfriend, Shay. Despite a fierce mutual attraction, Shay and Elliot broke up because Shay couldn’t let her guard down, couldn’t let Elliot in. But now they both need to trust each other to confront a psycho who seems to know all their secrets.

Coming in here had been a BFM. Big fucking mistake.  She should have just waited in the car…

Closing her eyes, she whispered, “Don’t.”

His lips brushed across her brow.  “Don’t want?  Tell you that I miss you?  Miss us?”

“Us?”  She laughed hollowly as she turned to face him.  “There is no us, remember?  You said that.  There’s me…and there’s you…and sometimes we’re together, but there’s no us.”

His gaze held hers.  “I never wanted it to be that way.  And maybe there was more of an us than I realized.  Seeing you…” he paused, took a deep breath.  “Seeing you just drives that home.”

Those intense, hypnotic eyes held hers.  Her heart kicked up a few beats, stealing her breath away.  As he started to dip his head, Shay stood there, frozen.  Shit.  What now…

His mouth, so warm, brushed against hers.  She gasped and then almost wished she hadn’t as he used that opportunity to tease the inside of her lips with his tongue, moving deeper and deeper.  His hands came around her waist, tugging her closer.

This is a bad idea…

The warning was already screaming in her head.  She couldn’t give him what he needed.  And he couldn’t accept what she had to give.  They would just hurt each other again—

Well, she did manage to go a few nights, she told herself.  Usually, on those nights, she had nightmares, but so what?  She wasn’t dreaming of Elliot and that was all that counted, right?

“Shay…”  He reached up and touched her shoulder.

But she didn’t want to hear what he had to say. She wasn’t going through this again.  He needed things she couldn’t give him…and it hurt.  She wasn’t whole inside and she had to accept that and stop pretending otherwise, and it fucking hurt.

Stooping down, she grabbed the basket of books from where he’d placed them on the floor.  Without looking back at him, she headed for the front of the store.

She had to get out of here.  She could pay for her damn books and meet Lorna at the café.  It was two doors down—she could walk two fucking doors.

Maybe not well.  She was already weaving a little, lethargy and weakness still pervading her body, but she damn well wasn’t going to linger around—

She stumbled, her feet all but giving out under her.  Crashing into a book dump just next to her, she flung out a hand, but there was nothing to grab.  Books from the display went flying and just before she would have crashed to the floor, a pair of strong, steady hands gripped her waist.  “I’ve got you,” Elliot murmured.

The room stopped spinning around her, even though her legs still felt like spaghetti noodles.  Her heart slowed back down to its normal speed for a few seconds, before embarrassment settled in.  Swallowing, she closed her eyes and reached for some level of control.

Stumbling all over the place.

Running away from Elliot.

She needed to get herself together.

Sucking in a desperate drought of air, she blew it back out.  Carefully, she eased away from Elliot, checking her legs—okay, she could walk.  This was good.

This was…bad.  Grimacing at the bookdump she’d knocked over, she opened her mouth to apologize.  The display had been holding a lot of books, she thought inanely.  Foil lettering on one of them caught her eyes.

Lettering the shade of blood.

Her stomach dropped to her knees, and the waning strength in her abused body disappeared completely.  Sinking to her knees, she reached out to touch one of the books.

His voice seemed to come to her from a tunnel.  Her blood roared in her ears and black dots danced in front of her eyes for a long, ugly second.  Stop it, Shay—breathe!

But then again, she’d never found herself holding one of her books in her hands—a book she had written—with a gold foil sticker on the top corner that read, Signed by the author!

Touching that sticker, she swallowed.