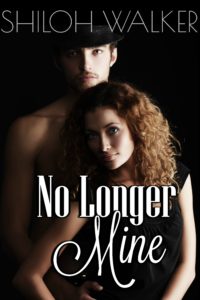 One woman, one man, and a love that won’t let either of them go.

Born on the wrong side of the tracks and dealt a fair share of hardship, Nikki Kline never gives up a fight. Even when her reason to keep going is ripped from her, Nikki tries desperately to hang on. But when the man who broke Nikki’s heart comes back into her life she doesn’t know how much she can take. Especially since that man seems determined to win back her damaged heart.

Wade Lightfoot is a man who knows he’s made more mistakes than most. As much as he would like to repair the damage he’s done to those he loves, Wade also knows there is no going back. But when he sets out to put things right the last thing he’s prepared to find out is that he had a son. A son he’ll never get the chance to meet.

When the truth is out and all the old wounds are bared, it seems impossible that Nikki and Wade will find their way back to each other. But true love is an undeniable force that even past hurts can’t destroy.

This book has been previously published and has been revised from its original release.

“Why don’t you make yourself at home?” she drawled, her voice sugar sweet. She soaked a rag with cool water and lifted it to her nape, swiping her neck and chest and arms with it, taking perverse pleasure as his eyes heated.

“Don’t mind if I do,” he returned, sipping at the drink and winking at her over the rim. His eyes, however, lacked the lighthearted tone that was in his words.

As she pressed the cloth to back of her neck, Nikki closed her eyes, trying hard to ignore him, but it was damn near impossible. She could feel his eyes on her as she swiped the cool rag over her hot flesh.

The pounding of her heart had nothing to do with him, she insisted. It was from the exercise, only the exercise.

“Need some help?” Wade offered, his voice going low and rough as her eyes opened and she studied him, her face flushed and damp, body gleaming slightly from her exertions.

Recognizing the look in his eyes, Nikki stopped playing with fire and threw the cloth into the sink. “What are you doing here, Wade?” she asked flatly, crossing her arms over her chest and leaning against the counter.

“Why?” she asked, her eyes narrowed, arms crossed tightly over her chest. Hostility all but radiated from her.

“Must be the charming company. You being such a gracious hostess and all.” Her anger rolled off his back. He had been in high spirits for several weeks now. Nikki hadn’t been seen around town with Gomer Pyle since that last weekend.

Little rumors were floating around that Stoner was packing up and leaving town. A For Sale sign posted at the garage confirmed said rumors and Wade had grinned for an hour after he had seen it.

“You really can’t take a hint, can you?”

“You shouldn’t be surprised to see me here, Nikki. I told you I wasn’t giving up,” he reminded her.

“I didn’t say I was surprised. Disappointed is more like it.” Running a fingertip over the rim of her discarded glass, she studied him quietly from under the shield of her lashes. “Don’t you think you’ve done enough?”

His cheeks flushed a dull red and he looked away, sighing. “I guess I deserve that.”

“You’re making this as hard as you can, aren’t you?” Wade demanded, resisting the urge to slam his own glass down on the table. Carefully, he sat it down and stood, his hands going into his back pockets. “Nik, I’m not going away. You might as well get used to that.”

“You’ve always loved kids. And I’ve never seen a kid you couldn’t enchant. Why wouldn’t I want you around her?” he asked, watching her.

Nikki turned away, gazing out the window. Finally, she turned her head to him and her eyes were sad. “I’m not who I used to be. I keep telling you that, and you just won’t listen.”

He had risen as she spoke and now was moving up beside her, cornering her between his body and the counter. As he moved closer, he saw the alarm in her eyes and braced himself. She always struck out when she was feeling threatened.

Never one to disappoint, she tossed her head back. In a voice as cold as winter, she said, “I can’t look at you or your child without seeing her and remembering what you did.”

Cupping her cheek in his hand, Wade sighed. “I’m not here to remind you of what I did. I just want to be with you.”

I just want to be with you.

Those words tore at her heart. He made it sound so easy…

“Being with you does remind me,” she snarled, slapping a hand against his chest as he leaned closer. The heat of his body rushed out and filled hers, making her feel more overheated than three hours of trail riding ever could. His eyes, so full of love and promises, seemed to mock her.

Wade was so full of life.

And she was so empty.