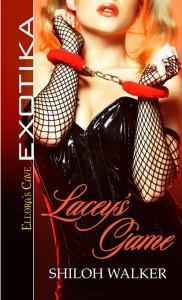 Lacey Morgan is fed up and heartbroken. Her boyfriend Brogan is all about control and she’s all about breaking through his barriers. Except she can’t seem to do it. Unwilling to settle for only part of him, she takes off, figuring it’s better that way. After all, half of a relationship is worse than none. She settles in with her best friend, hot and sexy photographer Lou, figuring she’ll lick her wounds and give her heart time to heal.

Finding Lacey gone is a punch to the gut. Finding her with another guy is even worse. She isn’t interested in listening to what he has to say, though. Not unless he’s willing to strip himself bare and give up pieces of himself that died long ago.

Brogan can’t do that. Or so he thinks. Lacey and Lou have other plans, a hot, torrid night, some hot, sexy pictures… Lacey is determined to show Brogan a new way of seeing things.

“I don’t see why you should bother,” Lacey said quietly.

“Because we need to talk.” Turning back to her, he focused on her face. Seeing her soothed that raw, ragged ache inside him but at the same time, it just made it worse because he realized he wasn’t going to be able to get her back, not as he’d hoped.

He was just now realizing how much he’d needed to get her back.

He thought he cared about her?

It was so much more than that and he hadn’t even seen it.

This was an ache inside him, one that kept him awake at night, that lived within him constantly.

Yet miles stood between them.

“Why?” Lacey’s eyes were sad. “What’s there to talk about? You keep me on the outside, Brogan, and no matter how much I tell you that I want in, you won’t listen. I tell you what I need, what I want, and you pat me on the head like I’m a child. You only share the bits and pieces of yourself that you think I can handle. You won’t let me have you.”

She shook her head. “I’m done with that.”

“No.” Tears glinted in her eyes but she blinked them away. “This has been coming for a long time and what happened at Tracks that night was the last straw. You want me on your terms…and I guess part of me can understand that. But your terms aren’t fair. You want the me you think you know. And that woman isn’t me. Here are my terms. You take all of me, however you want me, and give me all of you. But you won’t do that. So this isn’t happening.”

All of me… That echoed through him. All of Lacey. However he wanted her. Possessiveness, need, the emotions that hit him, so deep and fast, it was more than he could analyze.

Especially considering she had turned away.

Then he watched as she went back to the other man’s side. Stopped, rested a hand against his chest.

They spoke but he couldn’t hear a word they were saying over the roaring in his ears. All he could see was her turning her back on him. Walking away. Just as he’d turned his back on her a dozen times.

Give me all of you.

I can’t do that, he thought again.

Lacey was leaving the room now. Walking away from him. For good.

If he couldn’t find a way to take her, as he needed—as she needed, and find a way to give himself, completely, he was going to lose her.