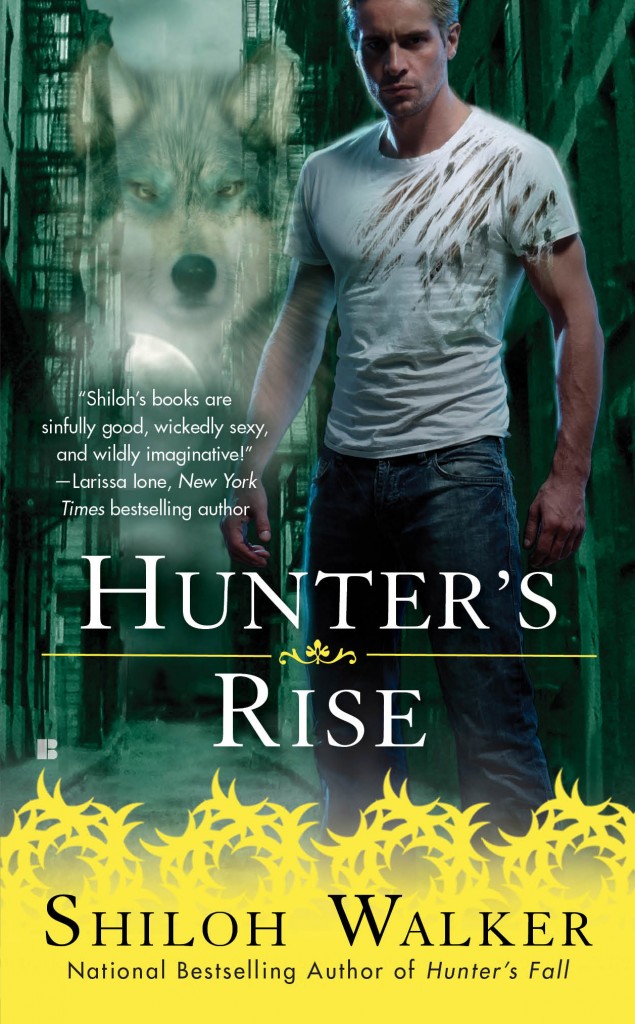 His past is a mystery, even to him—a werewolf with memories so lost in a fog that even the Hunter’s healers cannot help him. Two hundred years ago,Toronto awakened on an unfamiliar street, naked and alone. Dogged by the unanswered questions of his enigmatic existence, he fears he will never find the missing pieces of the puzzle that is his life.

The vampire Sylvia is no Hunter. She’s a take-no-prisoner mercenary that just barely skates this side of what the Hunters consider acceptable. She has no use for them, their laws, their rules. All she wants is to hunt her quarry, and make a lot of money. Her newest prey is a killer as devious as he is slippery. But her newest complication is of a more intimate sort: A blonde, blue-eyed werewolf who interferes with her plans in so many exquisite ways.

Okay, so he’s not here to kill me.

Why was he here?

Only one way to find out.  Sylvia drew one of her throwing knives—one of the smaller ones she could hide in the palm of her hand.  He wouldn’t be able to see it, although she still didn’t know if it would do her a hell of a lot of good against him.

Wouldn’t stop her from trying.

Squaring her shoulders, she pushed the door open, braced herself.  The attic room was empty—she’d known it would be.  Still, his scent was strong.  Very strong.  A silvery band of moonlight fell in through in an open window and she stared at it before following it along the floor to the open window.  She’d slept until moonrise.  Shit.  Why had that happened?  She never slept that late anymore.  She couldn’t take sunlight, but generally by twilight, she was up and moving.

Stroking the edge of her knife with her thumb, she eased her way into the darker shadows of the room.

He was down there, in the backyard, waiting for her.  And damn it.  He’d hauled her bike out.  Bastard.  He was leaning against it, leather stretching over those long thighs, a black T-shirt clinging to his lean chest.  He had that blond hair pulled back in a neat tail at the nape of his neck and he looked good enough to eat.  In many, many ways.

Lower, much lower, other things pulsed.  Because she knew he’d be aware, she figured she’d hide one hunger within another. Standing in the open window sill, keeping her knife hand free, she murmured, “Oh, look.  It’s Meals on Wheels.”

He grinned at her.  And then he leaped. Sylvia fell back, moving away from the window even as part of her wished she could stand there and just watch him move—

She pulled another knife, but didn’t bother hiding that one.  He’d go for the one she’d left in open view, she hoped.

He came through the window, almost silent, a grin on his lips, his blue eyes glinting with humor.  That hot, rich scent of his flooded her head and suddenly, she had to swallow.  It was that, or start drooling.

“Delivery service.”  She waggled her knife at him.  “I like that.”

She shrugged lazily.  “A time or two.  You know, I don’t like strangers touching my bike.”  Actually, she didn’t like anybody touching her bike.  “What’s your name?”

Instead of answering, his eyes dropped to her knife.  “You know, if you greeted the real Meals on Wheels that way, we’d have a problem.”

“I hadn’t exactly planned to be on the menu.”  He slanted his gaze to hers, a slow smile curling his lips.  “But if you’re hungry…just put away your blades.”

**This is the last Hunter book.  For more info, go here.