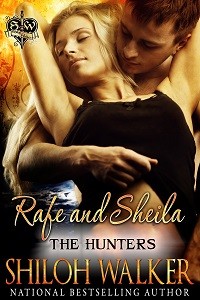 Seeing her warmed something inside him he thought had died long ago. Any man that so much as looked at her had him ready to kill.

He stalked into her rooms, ignoring his own as he dropped down on her bed, closing his eyes. Her scent was everywhere—her touch all over the place. Wrapped in it, he let it soothe the ache in his gut while he waited.

Sheila came to an abrupt halt just inside her door.

Rafe lay on the bed, his long, lean limbs sprawled sexily on the bed, the mellow gold of his skin gleaming against the white eyelet comforter. He wore jeans. Just jeans.

Her heart leaped into her throat, dancing a jig as his eyes opened.

A light dusting of hair trailed down the center of his chest, thickening into a darker line that disappeared under the waistband of his jeans. In the dim light, he stared at her from hooded eyes, his mouth curved in just the slightest of smiles.

The muscles in his belly worked as he sat up slowly, his eyes dark, all but glowing with hunger.

Her own hunger was a pulsing thing in her belly, throbbing and hot. The urge to leap atop him and kiss him senseless rose, but she beat it down.

Two days. He’d been back two bloody days, and he hadn’t said so much as a word to her. But now, he was in here waiting for her, and she knew damned well why. Not to talk to her, not to hold her or tell her that he’d missed her.

Just to fuck her. His cock strained under the sturdy denim cloth and she could hear his heartbeat picking up as he stared at her.

Nothing more. She loved him, with every fiber of her being and she was nothing more than a way for him to slake his hunger.

Sheila wasn’t doing this any more. He ignored her, except when he wanted to fuck her. And she just couldn’t take it any more.

“Get out, Rafe,” she said quietly, walking away from the bed, sitting down on the chair in front of her vanity, her fingers going to the band that held her braid together.

His voice, as always, made her shiver. Sliding him a blank glance, she lifted one shoulder and said, “No. The night went fine. Get out.”

In the mirror, she could see him as he rose. That vampires didn’t cast a reflection was a lie. They all had one. And his was moving closer to hers. Her hands fell away as his took the thick cable of her braid in his hands, slowly unwinding it, combing through the wavy locks, taking an inordinate amount of time doing so, smoothing it down along her shoulders and back, stroking the down the locks that spilled over the upper mounds of her breasts.

As the flats of his hands brushed against her nipples, Sheila bit back the whimper that rose in her throat. Throwing off his hands, she stood up and moved away, walking to her closet and kneeling down to unlace her boots. “How many times do I have to tell you to get out, Rafe?” she asked quietly.

For a long while, he was silent, and when she raised her head to look at him, a shiver raced down her spine at the intent, hungry look in his eyes. “You kicking me out, belle?” he asked gruffly.