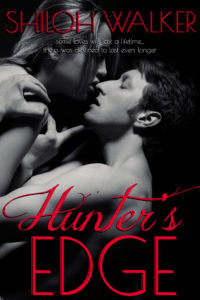 Some love can last a lifetime—their love was destined to last longer.

Angel’s first words to Kel were I’m going to marry you. She was seven at the time. He was eight. And he didn’t laugh when she spoke the words. Best friends as children, lovers as young adults, they had an unexplainable bond. Their future looked set. Until the night they were attacked by a creature that couldn’t exist.

Angel survived the attack—barely. But Kel didn’t. Or at least, nobody thought he did. His body was never found and Angel’s life would never be the same.

The attack might not have killed Kel’s body, but it sure as hell killed his heart. Twelve years later, there’s one part of his former life that he can’t move past. Angel. He can’t let her go, but he can’t have her either. She doesn’t even realize he is still alive.

But when a threat surfaces, Kel’s willing to do whatever it takes to protect Angel. Even if it drives them both to the edge of insanity and back.

This book is part of the author’s Hunter series, but can be read as a standalone.
Cover was updated in 2017. This is not a new title.

Anger permeated the entire enclave. That a vicious, brutal feral with a taste for rape and murder was so close–or at least had been so close, and they hadn’t realized it until now, it weighed on the lot of them.

But it was crushing Kel. Destroying what little soul he had left. “Phoebe ran because of me.”

“She ran because of her,” Sheila countered. “I know you, Kel. You wouldn’t have led her to believe in any way that you might love her. Women…” she shrugged, a bitter smile on her lips. “We can usually tell when somebody loves us or not. Too often, even when we suspect the answer is not, we don’t want to accept that. You can’t fault yourself for not loving her, any more than you can fault her for falling in love with you…or at least fooling herself into it. Phoebe was a big girl, Kel. She’d made it in this world before Rafe set up territory here. She knew there were risks and predators–and she made the choice to leave. Nobody forced it on her.”

Neither of them heard the footsteps. Until Rafe’s voice cut through the tension in the air, they hadn’t even realized he was there. But as they turned to look at the Master, both of them felt something change…a subtle shift in the air.

Subtle–but it came with something icy and ugly. Something that filled Kel with dread.

“Don’t tell me he’s killed again,” he rasped. Disgusted and furious, his hands closed into fists and the refrain started to circle through his mind once more.

The feral’s words whispered through his mind.

“I’m going to rip your heart out of your chest and smash it. You will die this time.”

Better off if the feral had killed him. Kel could be replaced. Rafe could get somebody besides Kel’s sorry ass in here, somebody who actually understood the purpose, somebody who cared.

“No, Kel. He hasn’t killed anybody yet that we know about.”  Rafe glanced at his wife.

The look that passed between them didn’t do a damn thing to make Kel feel better.

Neither did the appearance of Dominic and Toronto emerging from the hallway to flank Rafe. Toronto wouldn’t have finished checking things out in Tupelo already—which meant he was back because Rafe had sent for him.

Dominic’s brown eyes weren’t quite as blank as Toronto’s or Rafe’s. Dominic wasn’t that much older than Kel, in both human and vampire terms, and he hadn’t yet learned the fine art of hiding every single emotion.

The look in Dom’s eyes was one of worry, one of caution–and it had to do with Kel. He could feel it.

In a hoarse voice, Kel asked, “What’s going on, Rafe?”

Rafe, his voice impassive, said, “It has to do with what you left behind.”

…Angel… She was the only one he’d left behind that could still matter.