Previously published as Her Wildest Dreams 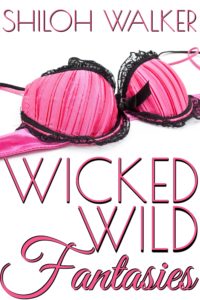 It wasn’t an unusual thing for Alex to pass out in bed with a woman and wake up without quite realizing where he was…or who he was with.

Fact of the matter was, he was something of a hound and he knew it.

So when soft, cool hands stroked over him, he turned into them.

When a mouth opened under his, he didn’t question it.

When naked thighs opened at his touch, he didn’t think twice.

When he found a wet, soft pussy?  He just appreciated.

Those cool hands stroked over his back with something akin to gentleness, though, and that made him uncomfortable.  He didn’t do gentle.  So he caught them and pinned them down, not hard…giving her enough room that she could pull away if she wanted, but she shivered and he knew enough to tell she liked it.

He curled his tongue around tight, hard nipples and let the smell of peaches flood his head as she whimpered out his name.

She writhed beneath him and worked herself against him until he thought maybe she’d drive him mad.  He should have gotten out the ropes…or at least his cuffs.  But he was too damn hot to worry about that now.  Later…and the thought made him smile.

He slid a finger through her wet curls, stroking her, shuddering as he felt how tight she was, how hot. She whimpered and whispered his name, curling against him, her pinned wrists straining, her body lifting upwards to his. He shoved his jeans down, freed his trapped cock, and drove deep inside.

It was the sound of her half-terrified scream that woke him up.