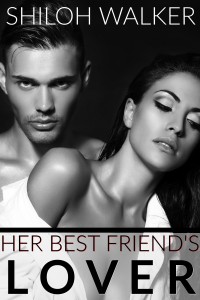 Dale Stoner loved women, and women seemed to love him right back. He danced around the line that led to seriousness, but any time one woman got too close, he two-stepped back, quick and pretty as you please. He’s fallen in love before and he doesn’t want to go that route again. No woman was ever going to get close to him again.

The only exception is his best friend, Lauren. She’s the only one who really matters. But she’s his friend…and guys don’t sleep with their best friends, do they?

Lauren wasn’t the kind of woman to believe in love at first sight, but then she met Dale. He’s everything she shouldn’t want—a flirt, a woman chaser…and he’s also in love with somebody else.

But one hot, steamy night changes everything…

“Dale, I’d rather be alone, just me and my wishes, than to fall into bed with every other guy who comes along. I might forget for a little while, but then it’s over. I’d be even more lonely than I was to begin with.”

Dale sat silently staring at the puddle of spilled whiskey that was seeping into his deep, plush carpet. How could she so accurately describe it? he wondered. How did she know about the ache that lived within him?

He scowled as the answer came into his drunken mind. Because, as she had told him, she was in love with somebody who didn’t have the sense to love her back. “Better off without him,” he announced, wishing for another swig from the bottle.

He grinned foolishly at her and mimicked her formal, regal tone, “Pardon?” before laughing.  “That’s what I love ‘bout you, Lauren. You’re such a damn lady, even with a drunk ass idiot.” He glanced around the room, wondered if he’d actually drunk enough to make it spin or if the fault buried below Kentuckiana had finally started shifting. “Better off without him,” he repeated.  “Probably ain’t good ‘nough for ya, anyway.”

Arching a slim black brow at him, she agreeably said, “Probably not.”

“This place is a damn sty,” Dale said, his foul mood gone in the blink of an eye. “What kind of pig lives here?”

“Hmmm, I wonder,” Lauren murmured, tucking her hands into her pockets to keep from reaching for him. He was so damned adorable. So damned sexy and rumpled.

He chuckled under his breath and dropped back down on the dark gray couch, staring up at her. Her face was turned sideways, studying the unholy mess, treating Dale to a clear view of her perfect profile.  Clear ivory skin, deep smoky eyes, wide lush mouth. “You sure are pretty, Lauren,” he said, grinning up at her. “If you don’t mind my saying so.”

“Thank you,” she said politely, a smile tugging the corners of her mouth as she turned her head to look at him. “Of course, I realize your judgment is a tad bit impaired right now.”

“Tad bit, my ass,” he muttered, enjoying the sensation of the room spinning around. The only thing in focus was Lauren, with her watchful gray eyes and amused smile. Dale lowered his gaze to her mouth—that wide, lush mouth, curved up in amusement. Carefully, concentrating on each separate movement, he rose to his feet.

“Why don’t I fix you something to eat and then clean up this mess?” she asked, sidestepping neatly when he reached for her, then positioning herself at his side as he tried to steady himself.

“Not hungry,” he told her, a sweet smile on his face. He reached out, stroked his hand down the satiny skin of her cheek. “Soft,” he murmured, turning his hand around and stroking his knuckles down her jaw to her neck.

“So are we friends again?” His gaze, bleary and bloodshot, wandered over her face.  “You here to make me feel all better?”

“Yes. That’s why I’m going to fix you something to eat so you don’t wake up with a hangover the size of Kansas,” she said steadily, even though her heart started tripping when his eyes started to linger, none too subtly, on her mouth.

“Don’t wanna eat,” he sulked, reaching up to touch his index finger to her bottom lip. “Not unless you’re on the menu.”