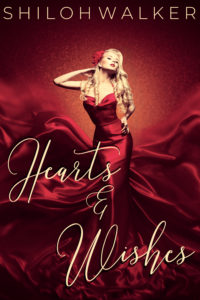 At twenty-five years old, Holly should be on top of the world. Rich, pampered and adored, everything she could ever ask for is hers, any wish she makes, granted.

Except for freedom—what she wants the most. Daughter of one of the most famous men in all existence—both real and imagined—she lives in near isolation, stifled by her overprotective father, slowly going out of her mind.

The bright spot in her existence is training with her father’s right-hand man, Rhys, although she doubts he’s aware of her crush.

When he’s sent off to deal with a rising threat in the world outside their protected land, Holly’s claustrophobic need for freedom rages out of control. After a heart-breaking betrayal and desperate for a chance at a life, she flees.

Unbeknownst to Holly and nearly everybody else, that rising threat has been waiting for just this moment. If Rhys doesn’t find her soon, her wish to have a life of her own may very we ll be the death of her.

This book was been previously published. It has been edited, but no new material was added.

sequel to Make Me Believe

No wise elf wanted to draw the humans’ attention.

Hiding and skulking in the shadows simply wasn’t the way her father’s men would operate. But if it wasn’t them, who was it?

Goose bumps broke out over her skin as she thought of the presence she’d sensed the past two nights. When his crawling, evil presence had woken her that morning near dawn, Holly had finally forced herself to face an ugly fact.

Whoever this was, he was searching for her. Specifically. He might not know her, but he felt her, the same way she sensed him and he wouldn’t give up until he found her. As his presence seemed to draw nearer and nearer, Holly had acknowledged it wouldn’t take the man that much longer to find her.

She had little choice.

As much as she hated the thought of returning home, she wasn’t about to risk putting her life into the hands of the watcher. He felt too foul, too corrupted.

It was time to go home.

Tears stung her eyes as she turned onto Bourbon Street. If she was smart, she would have gone home that morning when fear had pulled her into wakefulness. Or at least sent word.

Her father would have men at her side within seconds. She would have been safe.

But isolated, once more. It hadn’t seemed so much to want one more day. Cold, ugly energy reached out, drifted across her neck. Hissing in reaction, Holly sped up her pace. Wanting that one more day shouldn’t have been asking too much.

“Damn you,” she whispered under her breath, sending one more look over her shoulder. She saw no familiar face, saw nothing but the endless crowd and not a one of them seemed to notice her. But the press of evil had gotten stronger and–

Whipping her head around, she plowed straight into Rhys’ arms. A wolfish grin curved his lips and before she could even squeak out his name, he had lifted her in his arms and covered her mouth with his. Her head spun as Rhys spun her around. Without taking his mouth from hers, without looking around, he started to walk. The crowd seemed to part for him. Within moments, the noise was already fading as he carried her through the streets, turning seemingly at random. And still, his mouth was on hers, his tongue rubbing against hers, one arm banded around her hips and holding her body weight while his free hand touched every inch of her that he could reach.

By the time he tore his lips from hers, she was gasping, panting for air and already so damn hot, she thought she might explode. His face filled her vision as she stared at him. “Damn it, Holly, I’ve been out of mind worrying about you,” he muttered.

He lowered her to her feet and her legs wobbled. Sagging backward, she braced herself against the crumbling brick wall at her back and took a second to look around–and try to level out her breathing.

They were in an alley, but it was far from deserted. Halfway down, there were a couple of guys standing around smoking, not even glancing their way. Judging by the smells wafting through the open door beside them, they worked in a restaurant and were using their fifteen minute break to take in as much nicotine as possible. A little farther down the alley were two more people–one man kneeling in front of another. Holly’s eyes popped wide as she realized just why one of the guys was kneeling. He was busy giving the other one a blow job.

Blushing furiously, she jerked her head to the other side and looked towards the mouth of the alley. Two more men there, arguing in low, furious tones. A weird smell tickled her nose and she watched as one man reached into his pocket and brought out something in a small plastic bag, waving it in front of the other man’s face.

Drugs, she realized. Looking back at Rhys, she asked softly, “How did you find me?”

A slow, teasing smile curled his lips. She watched, frozen, as he reached up and tucked a stray curl behind her ear, his fingers lingering on the slight point. She had enough human blood in her veins that her ears were just a little pointed, not so very different from the typical human’s. Her mixed blood had let her mingle among the humans with ease. But they were damn sensitive–Holly never even realized how sensitive until Rhys leaned in and nuzzled her neck, then caught her lobe between his teeth, biting just a little too hard.

“I dreamt of you last night, precious,” he whispered in her ear. He leaned in, crowding her body back against the wall. Reaching up, she fisted her hands in his shirt and stared at him as he straightened and looked down at her. “I dreamt of you–lying in a chair and outside your window, jazz played. I dreamt of you–touched you…”