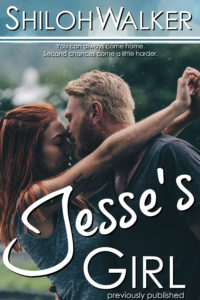 Zoe was devastated when Chase left, but she’s filed those bittersweet memories under “Moved On”.  She loves her life, and loves her husband. She has all she needs. And Chase keeps an honorable distance.

Some days just went from bad to worse. They started out miserable and just went to outright fucked up as the day progressed.

This had been one of them—it had started out shitty, and hit the fucked-up stage well before lunch had rolled around. Chase hadn’t even gotten around to eating lunch, something his hollow stomach wasn’t about to let him forget.

He had been back home for six months.

Six lousy, awful months and every damn day, he thought about just leaving.  He could sell the car he’d bought, load up his bike and just leave.  One of the reasons he’d come back no longer existed…at least not for him.

But that was a nightmare of work and today was the pinnacle of those nightmares.

But Tiffany finally had things under control and as she chattered with customers, he slipped into the back office and took five seconds to swear under his breath.

The day was done, he could go home, eat. Collapse.

No, he had some books to sort through, he remembered as he stared at the box sitting on his desk. Okay, go home, eat, sort through the books, then collapse.

Hefting the bag of books onto his shoulder, he headed out of the office and slipped out the back door.

The Book Nook had been Warren’s only bookstore for as long as he could remember. Now it was his bookstore. It had gone up for sale just two days after he’d come back home, when he’d seriously been considering whether he’d should get the hell out or really trying making this place his home.

In the end, there hadn’t been much of a contest.

Warren had always been home.

Even if he wanted to snarl or break something every time he saw Zoe and Roger together, he couldn’t leave just for that. He hadn’t come back just for Zoe. Even though part of him had hoped…

He’d come home because it was home.

Get over it, he told himself. Just like he’d told himself a hundred times over the past few months. Easier said than done.

But he managed. So what if he hadn’t gone out on a single date since he’d been here? It had only been six months.

It wasn’t that he was obsessing over her…not exactly.

He was just not too interested in anybody else.

He was busier than hell anyway. Trying to learn the ropes of being a business owner and running a bookstore. The only thing he’d previously known about bookstores was that heloved to read. On top of that, he had to bring it into a new century, keep it afloat during a struggling economy and it took plenty of time, plenty of energy.

When did he have time to think about dating?

He dumped the books in the back of his car, thinking they could wait a few minutes when he got home. The bottle of wine he had in the fridge was the first thing he’d open. Not a book, not the mail, not the bills, not something to eat.

The wine. Then maybe he’d start a fire. A nice way to end a rainy day.

The cold, wet drizzle had lasted throughout the day—it was great for bringing in customers, but now it was turning into a downpour. When he got home, he might call Tiffany and tell her she could close up if she wanted. This wasn’t the sort of weather that would bring out the customers.

People wanted to spend nights like this inside, curled up with a good book, a movie, a lover…

Sometimes, he thought he was just used to looking for her…everywhere.

Maybe that was why he saw her so easily.

Sitting on a bench on the green, even thought the weather wasn’t exactly ideal. Mid-forties and the rain was colder than ice.

Sitting there, staring at nothing.

Slamming on the brakes, he stared at her.

She didn’t notice. She was staring straight ahead, so still, so motionless. She could have been a statue. Her hair was wet, hanging down her back in dark gold ropes, a few tendrils curling around her heart-shaped face. Her mouth was unsmiling, her eyes wide and unblinking.

His heart bumped against his ribcage and he pulled his car over to the side of the road and got out.

In the past few months, they’d bumped into each other a few times. Always casual, and every single time, Roger had been there.

Not once had he been alone with her.

Not once had he been with her without Roger’s presence to serve as a buffer.

Chase couldn’t have said if that was a good thing or bad thing.

Now, as he crouched down in front of her, he realized he felt about as nervous as he had the first time he’d asked her out. How many years ago? Eighteen years. Eighteen years ago now…they’d been together almost all through high school.

She blinked slowly and shifted her eyes to his face. A slow, polite smile tugged at her lips and she murmured, “Hello, Chase. How are you this evening?”

He peered up at the sky and then looked back at her. Rain clung to her lashes, dripped off her nose. She didn’t seem to notice.

“Well, kind of wet.” Very wet. The rain was already snaking down past his collar, inside his shirt to trickle down his spine, and it was so damn cold. “Zoe, what are you doing sitting out here? It’s pouring out. Are you okay? Is…is your mom all right?”

He’d heard about her mother. Shit, that had to be hell. Zoe’s relationship with her hadn’t ever been easy, and now the woman was in a nursing home because she couldn’t take care of herself anymore. Couldn’t take care of herself, and there was no way she’d let Zoe do it, if even half of the stories he heard were true. She’d never been a pleasant woman, but lately, it was worse.

Zoe just stared at him. In the poor light, he could hardly make out her eyes, but he knew that soft, pale green better than he knew the color of his own eyes. They were too dark, the pupils large and dilated…shock, he realized.

Reaching out, he touched her hand. “Zoe?” he said quietly.

She blinked, a slow drift of her lashes over her eyes and then she looked down at his hand touching hers. When she looked up at him, there was some sense of awareness in her eyes, but only just. “Hello, Chase,” she said, again.

Like she had bumped into him on the street.

Not like he’d found her sitting in the middle of downpour, sitting alone in the square. Scowling, he closed his fingers around her wrist and tugged as he stood. “Come on, I’m taking you home.”

He was half-prepared for her to argue.

There was a time when she would have.

But she followed along behind him, not saying a word.

He wasn’t sure what bothered him more—her silence now, or the way he’d found her.