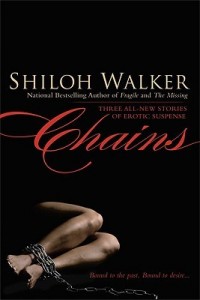 They weren’t friends. They weren’t enemies. The only thing the three girls had in common was the high school they went to in Madison, Ohio—until one tragic night. Now, fifteen years later, they’re returning home where passion—and danger—await…

Renee Lincoln was the homecoming queen—with the perfect boyfriend and the perfect life. After that horrible night, she rebelled the only way she knew how: by submitting to her wildest fantasies…

Tall, blonde, and athletic, Lacey Talbot was a golden girl with a bright future. She’s found success as a photographer, but no man has ever been able to satisfy her. No man but the bad boy she left behind…

Sherra Salinger has always looked like a princess out of some fairy tale. The books she writes, though, stem from the nightmare of that one night. And she shrinks from any man’s attention—especially the one stalking her…

They’re coming back to Madison—and it won’t be happy reunion. There are three men, all dangerous in a different way. And when each of them surrender their bodies to the heat, when they succumb to desire, they’ll find the safety they desperately need…

It took two tries before she could manage to get her jeans on and her fingers trembled so hard, she could barely fasten the button. Renee was cold, through and through, frozen to the core.

The vicious, ugly destruction outside her house and into the foyer, all done so silently she’d never heard a sound.  That she could be in the shower while somebody came in and cut into furniture, tore up her car, messed up the meticulous flowerbeds—and she’d never known.  Never heard them.

Ugly images of those stupid B movies started flashing through her head once more.  The girl in the shower, never aware somebody was in her house, not until somebody grabs her from behind and slices her throat—

“Oh, God…” she moaned and covered her mouth with her hand, trying to keep the whimpers silent.

She’d been handling it, though.  She’d been handling it fine until the sheriff showed up.  Seth Salinger.  Of all people.  She hadn’t heard that he had taken over the job, and it wasn’t something she would have thought would happen.  Not in a million years. Right up until he opened his mouth and all his blatant dislike of her came pouring out, she’d been handling things just fine.

Sure as hell doesn’t say much about your taste in guys or the kind of person you are.

“The person I was,” Renee muttered.  “And I was just a damn kid.” But it didn’t assuage the guilt.  She’d blamed herself for JD, for the actions of her parents, for years and she’d thought she moved past it.

Obviously, she was wrong.

There was no knock, no sound outside the door, but as she reached for the tank top, her skin broke out into goose bumps.  Her stomach went tight and her breathing went shallow.

Cutting her gaze to the door, she stared at it and swallowed.

Deacon was out there.  She didn’t even have to look.

“Open the door, Renee,” he said quietly.  Quiet, but firm as though he expected to be obeyed.  And Renee guessed that was exactly what he would expect.

Renee’s kneejerk reaction was to ignore him.  But instead, she went to the door and opened it, stood there half naked before him, totally forgetting that there were still guys from the sheriff’s department wandering through her home.

Deacon’s eyes narrowed.  He stepped forward, forcing her to back up and then he closed the door behind him.  Something flashed in his eyes, something that sent a shiver running down her spine—it wasn’t lust, at least not yet, but it was…something.

Possessiveness, maybe.  Another kneejerk reaction, but this one was totally unexpected.  Instead of her normal reaction, which would have been derisive amusement, she found herself liking it.

Enough that she just might have done something to bring it out a little more, tease him with, taunt him—but she was still shaking so hard, she was almost sick with it.  Glancing down, she found herself staring at her semi-exposed breasts with a little bit of dismay.

Her shirt.  Forgot her shirt.

“Here.”  Deacon spoke gently, softly, reaching out and taking the shirt from her and then he pulled it over her head, dressing her like she was a doll or some small child.  He caught the long ends of her hair and eased it out from under the shirt, smoothed it down.

Then he cupped her chin in his hand, angled her face so that their eyes met.  “Are you okay?” he asked.

“I’m fine,” she said automatically.  Pride, years of manners drilled into her head, they wouldn’t let her say that she really wanted to get out of this house, and maybe even fall apart a little.  Stupid, though, wasn’t it?  It wasn’t like she was hurt.  It wasn’t like she didn’t have the money to repair the damage or replace what couldn’t be fixed.

Seth’s scathing voice echoed in her ears. That car of yours is going to cost some money to get fixed. Of course, I don’t suppose that’s a problem for you. Instinctively, she flinched.  Plenty of people had given her grief for being born to money.  It was nothing new.

Deacon’s fingers tightened, drawing her attention back to him.  “Don’t lie to me,” he said, an underlying current of steel in his voice.

She rolled her eyes and sneered at him.  “Fine, then.  I’m doing pretty damn shitty.  Somebody busts open the front door, cuts up furniture, tear up my mom’s flowerbeds, tears up my car, all while I was blissfully unaware in the shower.”  An edge worked its way into her voice—she couldn’t help it, couldn’t help but sound a little bitchy as she added, “Then I see this guy that I fucked six different ways to Sunday, and find out it’s somebody that used to date one of my best friends.  Oh, I’m just peachy, Deacon.”

A grin curled the edges of his lips.  “Yeah, you’re going to be just fine.”  Then he slid his arms around her waist and eased her against him.

Just holding her.  Simple, comforting-and devastating.  There weren’t many people in her life who had ever been big on offering simple comfort.  Not her parents, not JD, not even Billy.

It was her undoing.  A harsh sob escaped her lips, followed by another, and another.

Deacon held her until the storm passed and then he eased her back, sat her down on the toilet, again treating her with the same care he’d use on a small child.  He rooted through the cabinets until he found some washcloths and he ran the water until it warmed.

All the while, Renee sat there staring at him, watching the play of muscles under his shirt, staring at his profile and comparing the harsh lines there to the features of the younger man from her memories.

It was there—plain as day, she could see it now.  Perhaps now that she was looking, she could see it. The hair shorter, a little darker. The dimples in his cheeks had deepened to deep slashes that bracketed his mouth. The lean, lanky lines of his body had filled out.

She hadn’t ever said more than a few words to Deacon, even though they’d grown up across the street from each other.  He ran in a different crowd and her mother hadn’t cared for the Cross family—common—that was Claudia’s outlook, even if they did have money.

It had been fifteen years since she’d seen him.  That night.  Too many of her memories from that night weren’t exactly what she could consider clear.  Before that, she hadn’t seen him much at all since he’d graduated high school. Understandable, she guessed, that she hadn’t recognized him.

Of course, she also didn’t remember him being so damned domineering, either.

Even as her body went all weak and soft, thinking of his domineering the other night, she tensed when he turned and tried to wash the tears from her face. Renee turned her head and reached for the rag.

“Be still,” he ordered brusquely.

Narrowing her eyes, she said, “A night in your bed didn’t turn me into your pet, Deacon.”

That same, sardonic grin appeared on his lips.  “Yeah, that’s a likely image.”  Then he cupped her chin in his hand—his skin was rough, but so warm… Shivering, unable to stop herself, she moved a little closer, seeking his warmth. “Just let me help, okay, Renee?”