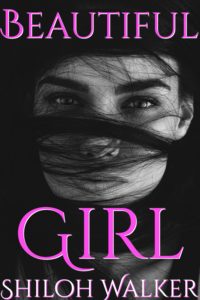 Twelve years ago, Del Prescott was the It girl.

You name it, she had it. Money, charm, looks, personality…and the perfect boyfriend to boot. Then Del disappeared to ‘study abroad’, giving no warning to friends or even Blake, that aforementioned perfect boyfriend.

She’s back now, and not just to celebrate what would have been her ten-year high school reunion.

Del’s come to face down her monsters once and for all…and to see Blake Mitchell, the man she never stopped loving.

But Blake isn’t the boy she left behind. Twelve years can change a man, and not just because he spent twelve years wondering about her, worrying about her…missing her.

Still, as he looks into Del’s eyes, he doesn’t see the smooth, polished world traveler he would have expected. Rather, she’s quieter, darker, sadder and she carries herself in a way that says she’s ready for fight or flight. It’s a look he’s seen before, too. Blake is now the sheriff of the small town where they grew up and the look in her eyes is one he recognizes all too well.

But Del is guarding her secrets close and getting her to open up is turning out to be harder than he could have expected.

Time is running out and Del must decide on whether to place her trust in the one person who owns her heart and soul.

Note: This title has been previously published.

“You know, I never got to dance with you at my senior prom. Why don’t you make it up to me now?”

The smile that curved her lips up hit in the chest with the force of sledgehammer.

“I’d love to.” He led her out onto the dance floor and guided her hands, first one, then the other up to his shoulders.

From the speakers, Garth Brooks sang a song about unanswered prayers. Blake wasn’t much for praying. Back before he’d stopped asking God for anything, though, this had been a regular prayer—having this woman back in his arms.

Maybe unanswered prayers weren’t the only thing to thank God for. At that moment, Blake was grateful for the answer to a prayer that had been a long time coming.

Del moved against him awkwardly at first, her body tense, but bit by bit, she relaxed. “So did you miss me at your senior prom?” she asked, cuddling against him just like she used to.

Lowering his head, he brushed a kiss against her cheek. He breathed in the soft, warm scent of her and managed to stifle his moan—just barely.

His voice was hoarse as he told her, “Not a bit.”

Tipping her head back, she asked, “Not even a little?”

“Nope.” Then he smiled and confessed, “I didn’t go.” Cupping a hand over the back of her head, he eased her back against him. “Wasn’t interested.”

Through the thin silk of her dress, he could feel the heat of her body and it was killing him. He could feel the soft, sweet weight of her breasts, the flat planes of her belly. His left hand rested at the small of her back and he was almost painfully aware of the rounded curve of her ass.

Nuzzling her neck, he murmured, “Did you miss your prom?” Against his chest, Del smiled. “I missed half of my junior year and almost all of my senior year. The only prom I went to was your junior prom.”

Blake stroked a hand up her back. “Then we have quite a few dances to catch up, don’t we? You think you can close your eyes and pretend you’re wearing some sexy little formal number and I’ve got my James Bond attire on? We can pretend there’s some half-assed wedding-type band on the stage and we’re going to dance just a few dances before we slip out to find someplace to go neck.”

“Hmmmm.” Her gaze dropped to his lips. “Necking, huh?”

“Yeah. Remember that junior prom? You had a pretty green dress on. Almost the same color as your eyes.”

She laughed. “That wasn’t the prom, sugar. It was the dinner dance at the country club.”

He shrugged. “Prom. Dinner dance. I had to wear a monkey suit for both of them, but it was worth it to see you. If the green dress was the dinner dance, then that pink number—it was the prom, right?”

Del nodded. The pink number, as Blake called it, had been a designer dress she’d bought from a boutique in Lexington. Her breath hitched a little as she remembered that night. He’d peeled her out of her dress and if a county sheriff hadn’t shown up, he would have had her out of the strapless bra and her panties before too long.

He cupped the back of her head, arching her head up to look at him.

His lids were low, giving him a sleepy-eyed look as he murmured, “Yeah, that was prom, all right.” A wicked light entered his eyes. “That was the night I got to see the princess of Prescott wearing nothing but a lacy pink bra and lacy pink panties.”

She felt her face burn and knew she must be blushing to the roots of her hair. “That was the night you stole those pink lace panties and wouldn’t give them back.”

He grinned at her and bent down, pressing a quick, light kiss to her lips that set her blood to a slow boil. “Yeah…you’re right.” Pressing his lips to her ear, Blake murmured, “Can I tell you a secret…I still have them.”

A startled, embarrassed laugh escaped her. “You do not.” Then she pulled away and looked at him. “Do you?”

With a grin crooking his lips, he shrugged. “That’s kind of a pathetic thing to lie about, holding on to some pink silk panties for more than twelve years.” He brushed his fingers across her lower lip. “I also kept all the letters you sent me that summer while I was gone.”

A harsh look tightened his face and he glanced around. He grabbed her hand and guided her off the dance floor and out the open doors that led to the patio. It wasn’t much quieter out there and he led her past the groups of laughing people into the gardens just beyond.

It was darker out there, away from the lights of the patio, and quieter. From there, the sounds of the music were distant and faint. “I wish you would have said something, Dee—Del,” he corrected himself.

She pressed a fingertip to his lips. “You can call me whatever you want, Blake.”

He caught her hand in his wrist and pressed a kiss to her palm. “I kept those letters, Dee. I’ve read them so many times they’re practically falling apart. Why didn’t you say something?”