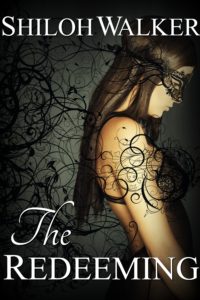 Faced with the choice of torment or redemption, Jonah accepts the bargain laid out by his guardian angel as he lies dying in the street alone. Change…or die.

Not a hard choice, it seems. But then he meets Lily and has to wonder just what he’s agreed to by accepting this new life.

Even the angels call Lily unique—and she is. Born of a demon, but longing to be more, her one wish is granted—temporarily. But now her time is running out and she has an impossible task set before her. It doesn’t help that she can’t stop thinking of Jonah…or the very real demons that will come hunting her once they realize where she is.

With demons and angels tracking their every move, Jonah and Lily have a life to save before they can save themselves.

“You want her to face her mother.” Jonah turned away, hoping to hide the fiery rage that built within, the need to howl. Not right…what they demanded wasn’t right. “Can’t you see how terrified she is?”

Jonah certainly could. Now he understood the fear he’d seen in her eyes.

Sansan sighed. “Indeed, we see it. But having a soul means you’re willing to sacrifice all for another. If she didn’t fear her mother, there would be no sacrifice.”

As Jonah turned, glaring, he found himself alone, in an empty room. Whirling, he grabbed a stained coffee cup from the desk and hurled it at the wall. “Damn it!” he shouted.

And then he collapsed onto the ground, looping his arms around his knees and bowing his head. “Damn it,” he whispered.

He was still trying to recover his ground when the knock came, a long time later. Wearily, he trudged to the door, opening it with dread. He knew who was on the other side.

A woman he had dreamed of.

A woman he hungered for.

A woman he barely knew.

A woman who had been born of a demon.