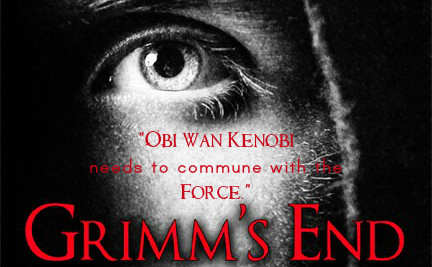 You of all creatures.

Something wet trickled down his hand and he looked down to see that it was stained with the ichor that served for blood in the demons that populated this world.

He swiped it on the rags that had become of his clothes.

Mandy had given these to him.

Soon, they’d barely even resemble the jeans they’d once been. He stroked a finger down the worn seam and thought of her.

Drawn by an instinct he couldn’t explain, he slid to the ground and used his knife to cut a small strip from one leg’s hem. It was already ragged so he went up higher and cut where it wasn’t too torn or worn. Once he had a long enough strip, he tore it free from the rest of the leg and stared at it.

Is there anything you can wear that won’t end up white?

Laughter echoed in her eyes as she walked in and found him plucking at the already fading shirt she’d given him. He’d warned her, told her she was wasting her money.

It’s my money. Let me waste it. You can come into the twenty-first century, Will. Wear some jeans. Wear a T-shirt, a sweatshirt, a Henley…be comfortable for once in your endless life.

Slowly, he wrapped the faded denim around the hilt of his knife, up near the top, smoothing it and tightening it until it didn’t interfere with his grip, and then adjusting it until it felt like it was part of the grip itself.

He closed his eyes and stroked his thumb down. He held it in place with his thumb as he walked across the ground, returning to what had become his base. Any number of things ended up on this side. In the time since he’d been here—weeks, months, years—he’d come across the salvaged remains of a bus, a small private jet, numerous cars, numerous corpses.

Few of the demons had the strength, but on rare occasion, some horror allowed a creature like an orin to twist at a rip and make it large enough for a few moments, just a few, to pull something massive through. Something like a bus, a small private jet…a few cars.

He scavenged those sites, falling back on skills he hadn’t had to use since early in his life, but some things, it seemed, were never truly lost. Food, while not crucial, made things easier so he took every bit he found, eating the perishables immediately and saving anything that didn’t have a shelf life. The few times he’d been able to make any attempt to clean himself had been because he’d come across a diaper bag or something of that sort.

The item he needed today had come from a bag as well.

A woman’s purse. He found a small sewing kit tucked inside his cache and sat down, his back to the rough rock wall just outside the mouth of his cave and he threaded the needle as he stared out across a barren landscape.

He went over the scrap of fabric with careful, neat stitches, reliving the past dozen years—or the dozen years he’d had with her—over in his mind. They were painfully clear, like they’d been cut with crystal and etched upon his brain.

“She can’t survive these wounds. And they are too severe for me to heal.”

“Then bring her over. She fought fucking parasei. They raped her, and she still fought.”

He shoved the needle through the material.

Laughing at him when he felt the tug of one of his Grimm.

“Obi Wan Kenobi needs to commune with the Force.”

“And what would you call it, Will? You’re never more than three feet away!”

The needle stabbed into his finger and broke when it hit his bone. He swore and jerked it out, staring at the blood as it welled. But he didn’t see the blood.

With a roar, he shoved upright and spun, slamming his fist into the rock. It did nothing to ease his pain and he did it again and again and again. Rock cracked and dust rose around him and he never noticed.

He continued to pound on the massive wall of stone even as pebbles, small bits of rock and debris started to rain down on him from above.

If it hadn’t been for the ripple in the air, he might have buried himself. Might have, and he likely would have welcomed it. The crushing, suffocating weight of being buried under tons of stone would have been a welcome respite from the weight of his own guilt and every other obstacle he’d placed between himself and the one woman in all his years that he’d actually ever wanted.