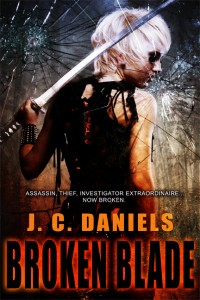 “Go ahead.” Shoving away from the shower, he came closer. Violence, danger and anger radiated from him and fear pulsed inside me, despite the fact that I knew, deep inside, that he wouldn’t hurt me. Damon was one of the few people who was safe.

Too bad my body didn’t get that message.

He reached up and my breath froze in my lungs as he slid a hand inside my vest. The back of his hand brushed against my breast and the black band of terror grabbed me, held tight.

“You’re so fucking afraid now, Kit,” he whispered, dipping his head to murmur into my ear. “It’s killing me.”

Then he lifted his head and reached down. He caught my left hand and pushed one of my knives into it. “Bloody me.”

I jerked my hand away—or I tried. He still held my wrist and he wasn’t letting go.

“That’s a silver blade, you son of a bitch.”

“I know.” He guided my blade to his chest, his grip relentless. “Bloody me. I’d feel better for it. And if it would do something to take that fear away…” A muscle pulsed in his jaw and he was standing close enough, I could hear the thunderous sound of his heart, racing far too fast. I didn’t have ears as sensitive as his—if he’d been standing any farther away, I couldn’t have heard it. As it was, though, the roar of blood in my ears, the racing of his heart, the adrenaline crashing inside me and the torment I saw on his face…the torment I felt in me…it was too much. “Sam’s not the only one who owes you blood, baby girl.”

Swearing, he dropped my wrist. I put the knife away and darted toward the door.

He slammed it shut before I managed to get it open an inch.

“Don’t, okay?” I leaned my brow against the wood and closed my eyes. “I need to get out of here. I need to breathe. I need to…”

His fingers brushed across my shoulder and he pressed his head to the back of mine. “I miss you.”

Tears burned my eyes and although it didn’t seem possible, the ache in my heart spread.

I really, really wish that what I’d told Chang was true. That the woman I’d been was dead and gone, that nothing of my old life mattered. If I could believe that, then it wouldn’t hurt so much to stand there.

But I wasn’t going to make myself better, or stronger, or fight my way out of this hell I currently lived in if I kept lying to myself. About anything. “I miss you, too.”

He reached up, resting a hand on my hip.

“But that doesn’t mean anything,” I told him. “Not if I can’t find me again. I’m still lost, Damon. I have to find who I am…I have to find my way again.”

Easing around, I stared into his eyes. Close. He was so close.

His eyes widened and he stilled, stayed there, one arm braced on the wall by my head while his hand rested on my hip. I could handle this, I decided. The fear was there, but I couldn’t expect that to go away so easily. And…hell. It was Damon. Just having him this close had my heart racing and not all of it had to do with fearful things.

Curious, I placed my hand to his chest and as his heart slammed against my palm, I felt the way my own sped up in answer.

I did miss this…even when it wasn’t a spur of the moment kiss. I missed this. I missed us.

But I wasn’t ready.

“That day, up in the mountains,” I said quietly. “I told you that I was broken…so far from me that I didn’t think I’d ever find my way back.”

A harsh, ragged breath escaped him. “I know.”

“You told me you’d find it for me.” The heat of him scalded me, even as it warmed me. “I didn’t want to hear it then…and I can’t be sorry for that. I can’t let somebody find my way for me. I just can’t. I’ve got to do it for myself. But I’m trying. Okay?”

He stroked a hand down my hair. “I told you…I’ll be waiting.”

“It may never happen.” Turning my face into his hand, I kissed his rough palm. It hurt more than a little as I pushed him away. “You have to understand that.”

He was quiet as he stepped back.

Just before I slipped out the door, he asked softly, “Do you want it to happen?”

The question stopped me in my tracks and I looked back at him. “Do I want what?”

“Us. This.” Those eyes watched me, so carefully. “I’ll wait. Forever. It doesn’t matter how long. But is that what you want from me? Are you coming back to me?”

“I…” I licked my lips and shook my head. It shouldn’t be such a hard question. “I don’t know.”

He smiled sadly, looking away. “That’s fine. Like I said. I’ll be waiting.”

6 Replies to “From Broke Blade… in the doghouse”