UTA: Due to matters outside of my control, the print date for The Hunters 1 & 2 has been pushed back a few weeks.  I’m sorry.

🙂 Some people are just finding these books and wanted to be able to read them in print, so I’m giving it a shot.

The first two are available in print.  So far, it’s just showing up on Amazon, but it will be available through other retailers.  It can be ordered, but it won’t likely be stocked in stores so if you want it, make note of the ISBN and have them order it in. 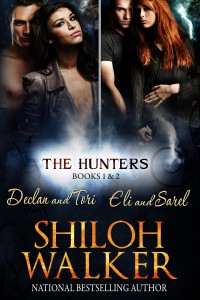 Declan Reilly was normally the last person she’d go to for help, but now he was the first on her list. He can help; she knows he can. She never could have planned on what happens next, though…the sexy detective is so much more than he appears.

Three centuries is a long time to spend alone…but Elijah Crawford is used to it. He’s got his friends, he’s got thugs to kill, and a mild obsession with an on-and-off again lover to keep him occupied.

But then a woman appears in his dark world, one who just might bring some light to those endless nights. Just one look makes him hunger. Just one glimpse makes him burn.

There’s just one complication. She wants him dead.

Warning: This book contains a pissed-off witch, a sexy Master vampire, some serious ménage action and lots of one-on-one time…of the up-close-and-personal variety. And I do mean lots…

Still waiting for it to show on all platforms, but it should be there sooner or later.