So I can’t sleep.  The DH is still in bed, as I type.  The kids just woke up and have had poptarts, are bouncing off the walls.  I’ll have to do something to entertain them soon.

The time changes have my internal clock all wonky.  I woke up before six am.  In whatever timezone I’m in.  This was okay.  I thought I could get a sunrise pic-it wasn’t meant to be, though.  It was still too early when I first went out. 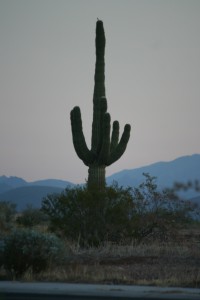 Then I tried to go back to bed.  It was too dim to get much and I was tired.  Didn’t sleep.  Tossed.  Turned.

But the camera settings weren’t right-it was so fricking bright out and I didn’t have my sunglasses, I was half-blinded, trying to take the pictures standing behind a wall while my eyes adjusted…I looked like a dork.  Image isn’t as good as I’d like.  Might work okay in black and white.  I dunno.  But I’ll try again.

Off in the distance, there was a balloon.  That pic wasn’t great, but I kept hearing this whooshing sound while I was snapping pics.  I looked up.  Saw this. 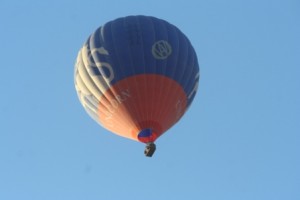 And I saw this… 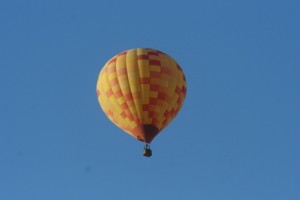 This has been the most amazing trip, and so far, all we’ve really done is drive.  And stop at a few places so I can sign books and buy some research stuff.

Here’s a picture I took in Texas, too.  Palo Duro Canyon, just outside of Amarillo.

3 Replies to “Everybody say… oooohhhh…”